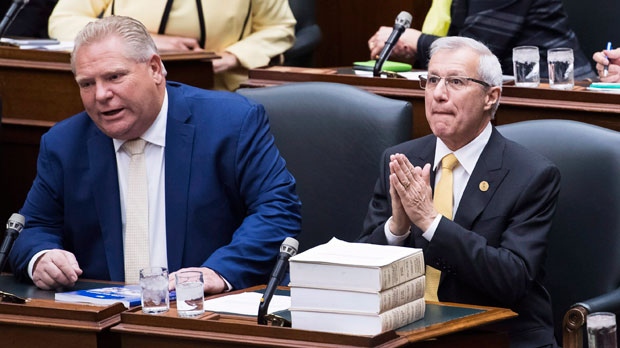 TORONTO -- Ontario's Progressive Conservative government presented an update on the state of the province's finances on Thursday, their first major fiscal plan since wining a majority in the spring election. Here are some highlights from the 156-page document:

- Reduced deficit: The government says it has reduced the 2018-19 deficit by $500,000 to $14.5 billion. That was achieved through cutting $3.2 billion in expenses with measures such as a freeze on hiring and limits on discretionary spending in the public service. However, much of those savings were cancelled out by the loss of $2.7 billion in revenue, largely due to the dismantling of cap and trade and scrapping planned tax increases.

- Relief for low-income workers: Those earning $30,000 or less will no longer have to pay provincial income tax starting next year, and those earning between $30,000 and $38,000 will get a tax cut. The government says some 1.1 million Ontarians will get relief through this program. The fall economic statement says that translates to savings of about $850 a year for a person who makes about $30,000. But critics say it would help low-income workers more if the government reinstated a planned increase to the minimum wage that would see it rise to $15 an hour next year.

- Tax changes: The government is halting planned tax increases for various groups including small businesses. Those taxes would have poured some $308 million into the public purse, according to the document. The Progressive Conservatives are also reversing tax changes brought in by the Liberals in the last budget, which included the creation of two new tax brackets and an increase in tax rates for the province's highest earners.

- Consolidation of oversight: Three of the province's independent oversight offices -- the environmental commissioner, the child and youth advocate and the French language services commissioner -- are being consolidated into either the existing auditor general's or provincial ombudsman's offices. The government did not say how much that is expected to save nor what would happen to those currently in those offices, but Finance Minister Vic Fedeli repeated the government's promise that no jobs will be cut.

- French university: Plans for a standalone French-language university were scrapped, despite the government's assurances this summer that it was "fully committed" to the project. The finance minister did not say how much money the province expects to save as a result of that decision.

- Alcohol sales: Starting Dec. 2, the LCBO and Beer Store will be allowed to stay open until 11 p.m. seven days a week. The fiscal update also repeats the premier's plan to expand sales of beer and wine to corner and big box stores.