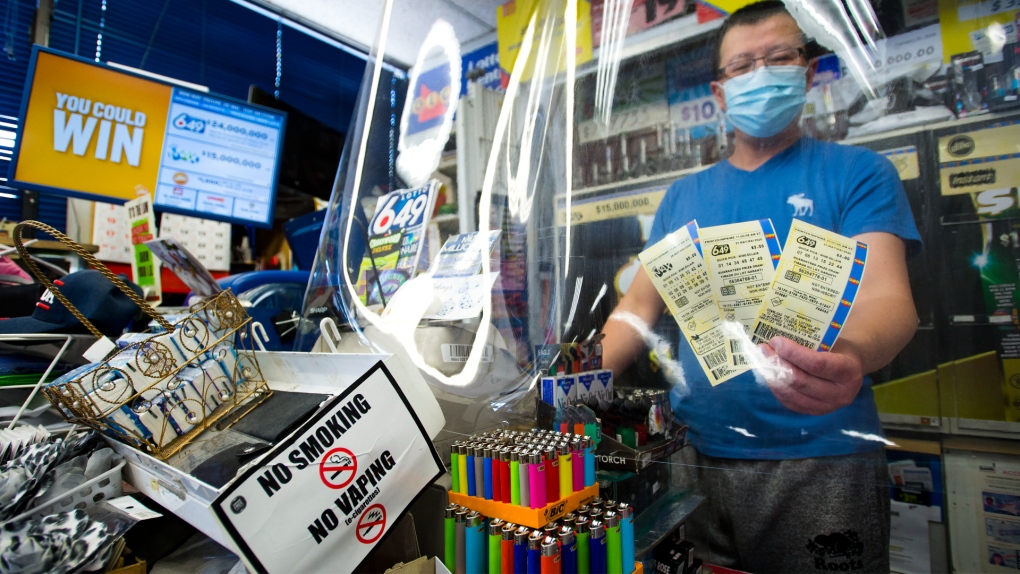 A convenience store owner hands OLG 649 and Lotto Max tickets at his store during the COVID-19 pandemic in Mississauga, Ont., on Monday, May 25, 2020. Premier Doug Ford's government gives $500M loan to Ontario Lottery and Gaming. THE CANADIAN PRESS/Nathan Denette

According to Tony Bitonti with the Ontario Lottery and Gaming Corporation, the winning ticket for Tuesday's Lotto Max draw was sold in Richmond Hill, Ont.

There were also two second-prize tickets sold, each worth $121,440, Bitonti told CTV News Toronto. One was sold in Ottawa, and the other in North York.

No Maxmillion winners were announced in Ontario Wednesday.

Last week, Mississauga resident Jeffrey Gurczenski, 64, won $150,000 playing The Bigger Spinner game, and it was the second time he'd hit the jackpot in just one year. A few months prior, he won nearly $100,000 in Poker Lotto.

The jackpot for the next draw on Dec. 2 will be an estimated $15 million.

WHAT TO DO IF YOU WIN THE LOTTERY

lf you find yourself with a winning ticket, Pattie Lovett-Reid, former chief financial commentator for CTV News, has some advice.

Lovett-Reid's first tip is to resist telling anyone, at least not right away.

“Family, friends, charities, they all come knocking, and you may be unprepared in terms of how to respond,” she said. “That doesn’t mean that you don’t respond and you don’t give, because I think you do. I also think you get to spend, but you need to know what to save. So you have to have a plan.”

Lovett-Reid said a big lottery win, or any sudden windfall, should be followed up with a call to a lawyer, accountant or financial adviser.

She also suggests three simple rules: spend some, give some, and save some.