TORONTO -- From backyards to popular parks, the gypsy moth is wreaking havoc across Ontario.

“I have changed my running routes in the park,” said Rebecca Pinkus, a frequent High Park visitor in Toronto.

“There have been some paths where after it rains the caterpillars fall and get squished and there’s caterpillar excrement.”

“This year, we’re waiting for the data to come in,” he said.

There are some remedies to help you get rid of the insect, but it depends what part of the life cycle it’s in, Dutkiewicz said.

Between August and April, the gypsy moth is in the egg stage.

Dutkiewicz recommends looking for the egg masses on trees and scraping them off with something such as a butter knife.

Next comes the caterpillar stage, arguably the worst.

“If you just stop and listen to the trees you can hear them chewing. I mean it’s just terrifying,” said Dan Riskin, CTV News’ Science and Technology Specialist.

“One of my kids was also quite terrified of the whole thing,” he said after a family visit to the Kortright Centre for Conservation in Vaughan. 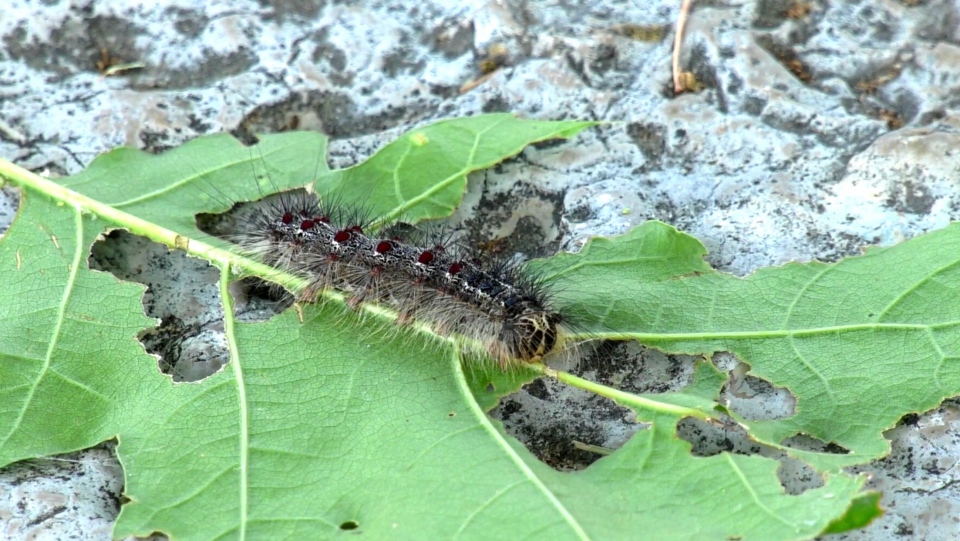 You can pick up a bio-pesticide spray called BTK at a local garden centre or hardware store, Dutkiewicz recommended.

“The caterpillars have to actually ingest the bio-pesticide basically in May in order for it to have any effect in June or whenever,” he said.

Using the spray now would almost be a waste of money, Dutkiewicz said, because there aren’t as many leaves for the insect to eat.

Wrapping a burlap band at chest-level around the tree will attract caterpillars looking for shade.

“Right now in June is the perfect time to use the burlap trap methods.”

Dutkiewicz suggests checking the burlap at lease once or twice a day, pick off the caterpillars then toss them into soapy water.

Some Ontarians have even resorted to using a vacuum or broom, which can work too.

For Pinkus, who views High Park and the allotment garden as a sanctuary, a change in the insect’s life cycle can’t come soon enough.

“The raspberry plants and my rhubarb plants have both been decimated.”