Five teenagers are injured after a shooting in the city's west end Wednesday evening.

Police said the shooting happened just after 7:30 p.m. inside a building in the area of Clearview Heights Road near Trethewey Drive.

All five victims are in hospital with injuries ranging from serious to life threatening, police said.

During the initial response, police said they found two victims, and then found two more shortly after. A fifth victim showed up in hospital on his own. Three were taken to a trauma centre via an emergency run, police said.

Police Chief Mark Saunders told reporters Wednesday that two of the victims were females, aged 16 and 17, and the three others were males between the ages of 16 and 18. 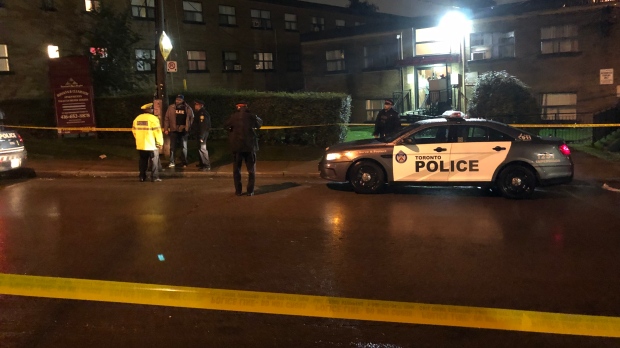 "They're very young people that are shot," Saunders said. "There's no need for this to happen."

He said the suspects are three males in their late teens to early 20s. They were last seen in a black Sedan eastbound on Clearview Heights. Police said they were wearing dark-coloured clothing with hoodies.

Saunders said it was "definitely" a targeted shooting, and that they will be examining footage from local businesses in the area. He said that more than 20 shots were fired.

Preliminary information suggests that the black sedan showed up with the three suspects at the building, he said.

The suspects entered the building and opened fire on the people that were standing in the hallway, Saunders said.

"They came in, and within a short period of time of coming into the building, they opened that door and fired directly at those people that were standing in the hallway," he said.

Saunders called it a very "solvable case" if everyone works together.

He said that once police speak to the victims, they will be able to gather more information.

No weapons have been recovered yet, police said.

Police are asking anyone with information or video footage to contact investigators.

UPDATE: Four victims have been taken to local trauma centres, three by way of emergency run. No info on injuries. The investigation is active and ongoing. Any info on this, please call 416-808-1200 or CrimeStoppers at 416-222-8477 or online at https://t.co/cw7CRjHEH3.
^rr