A little more than a year after two members of Toronto’s rap community were fatally shot in the city’s Entertainment District during the Canada Day long weekend, Toronto police confirm an arrest has been made.

Shots were fired outside Cube Nightclub, located near Queen Street West and Peter Street, around 8 p.m. on June 30, 2018.

Police said that two men and a woman, who were standing on the street, were struck by bullets at the time. They were rushed to a local trauma centre for treatment. 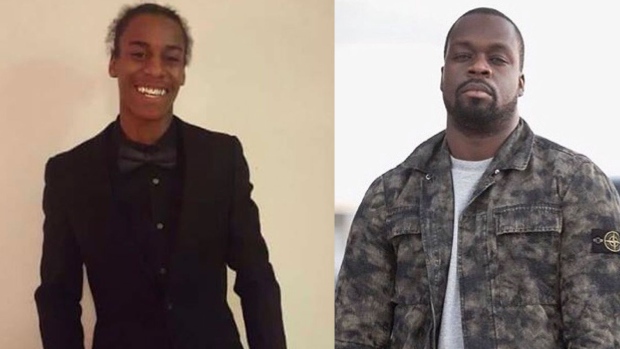 Jahvante Smart, 21, known as "Smoke Dawg" (left) and Ernest Modekwe, 28, (right) were gunned down in Toronto.

A Canada-wide warrant was issued for 22-year-old Abdulkadir Handule, of Toronto, on July 11, 2018.

According to Toronto police, Handule was taken into custody in the area of Burnaby, British Columbia last month. He was arrested by the Royal Canadian Mounted Police on unrelated charges, investigators said.

He has since been turned over to Toronto police and appeared in court on Thursday.

Speaking with CTV News Toronto, the father of Ernest Modeke said that he was informed of Handule’s arrest two days ago. He said that all he has hoped for over the last year is that the people responsible would be found.

“We prayed that these guys would be arrested,” said Okwii Modekwe. “Even when he was arrested in Vancouver, I was still not convinced until he was transferred back to Toronto.”

“For the past one year, every other day I (have) been to his grave with flowers. And it’s been very depressing you know? It’s something no parents would wish for any other parents at all.”

A second suspect is still being sought in connection with the shooting. A 16-year-old boy, who cannot be identified under the Youth Criminal Justice Act, is wanted for two counts of first-degree murder and one count of attempted murder.

Both victims were active members of Toronto’s rap community. Modekwe was a music brand manager that worked with a hip-hop collective called “Prime” and Smart was an up-and-coming artist who was part of the same collective. Smart released his first single in 2015 and was a rapper on Drake’s “Boy Meets World” tour.

Five months after he was shot, Smart’s album “Struggle Before Glory” was released posthumously.

Owkii Modekwe said that his son was a “very giving child” and the family is trying to establish a scholarship foundation in his name at the University of Toronto, where he was a business graduate. In the meantime, he hopes the outstanding suspect will turn himself in and said that he won’t give up on the search.

“Even if it lasts for 10 years I will never give up,” Okwii Modekwe said. “As far as I’m still around, I will fight for him. I will make sure these two guys are in jail for the rest of their lives. This is my promise.”