Parents with babies in their arms protested loudly outside the Sheraton Centre on Queen Street West Sunday morning, as labour negotiations between the education workers’ union and the province continued inside.

“Hey, hey, ho, ho, Doug Ford has got to go,” they chanted, as they called on the Ford government to give education workers what they call a “fair deal.”

“These workers have a big place in our classrooms and they deserve to be paid fairly and treated fairly,” Kimberly Perry said, whose son is currently in Grade 9.

“They’re an integral part of what needs to happen in the school system to support young people.”

Some 55,000 education workers — which include custodial and clerical staff, as well as early childhood educators — have been without a contract since Aug. 31. They began a work-to-rule campaign last week, and will walk off the job Monday Oct.7 if a deal isn’t reached by the midnight strike deadline. 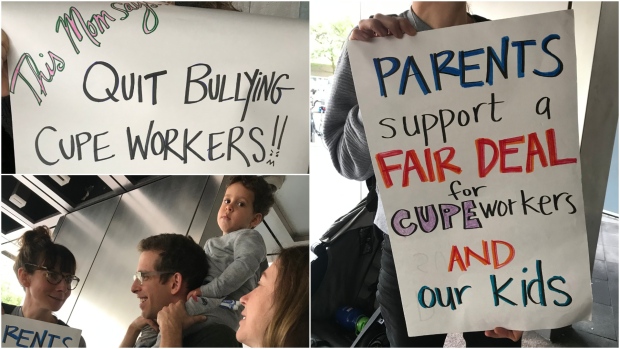 Parents showed up outside of the Sheraton Hotel where CUPE workers and provincial government representatives are negotiating. (CTV News Toronto/Janice Golding)

“They are so focussed on things like getting beer into corner stores that they’re forgetting the things that matter.”

A strike would mean the cancellation of both classes and extracurricular activities at schools from more than a dozen Ontario school boards.

Last week, the Toronto District School Board issued a statement that said it would close all schools “for the duration of the job action” given almost half of the board’s employees would be off the job. 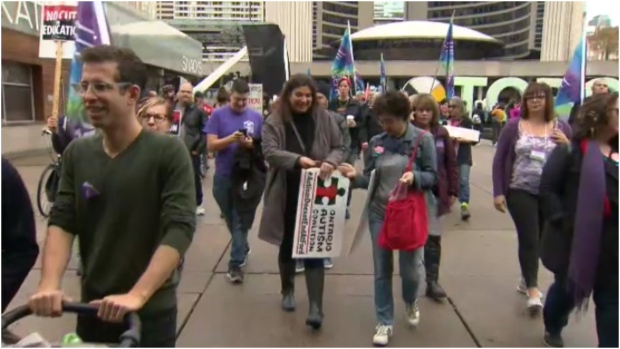 “As a parent, I know it can be incredibly inconvenient. I know there’s a lot of anxiety among parents across the province, people scrambling for child care,” father James Campbell said.

But he added that parents have to stand in solidarity with education workers.

“I’m just so thankful and grateful for the CUPE workers, for the education assistants, for the custodians and the school staff who are taking this incredibly brave and really inspiring step to stand up and say ‘no’.”

About 150 people turned out to the protest, which was organized by the “Ontario Families for Public Education”.