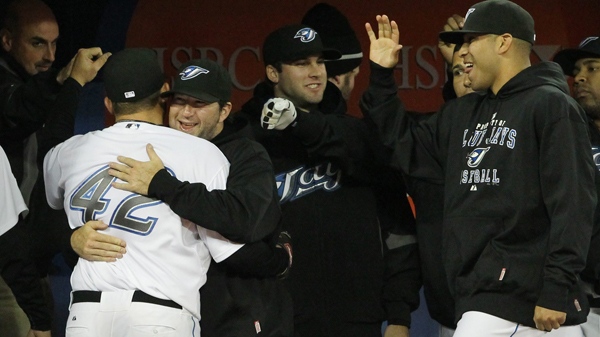 TORONTO - Two weeks to the day after he learned he had made the team, after a nervous walk to meet with the general manager on the final day of spring training, Toronto Blue Jays pitcher Dana Eveland took to the mound and claimed a piece of franchise history.

The 26-year-old left-hander threw four scoreless innings to open his second start with the Blue Jays, setting a team record while helping the team to a 7-3 win over the Chicago White Sox on Thursday night. Eveland did not allow a run in his debut last week, and his run of 11 1/3 scoreless innings is the longest any starter has gone at the beginning of their career in Toronto.

It was also news two weeks ago when it was announced Eveland had not only made the team, but also the starting rotation. He had bounced between the Oakland A's and triple-A last year, and he was traded to Toronto over the off-season for a player to be named later or cash considerations.

His scoreless run beat a record that had stood for more than 20 years. Mike Flanagan pitched 10 2/3 scoreless innings to begin his career as a Blue Jay in 1987.

"He's a guy that, I guess a few years back had a good year in Oakland, and then kind of got off the track a little bit," Blue Jays manager Cito Gaston said of Eveland. "But it's nice to see him back, doing what he's doing."

"I'm hoping that they're happy with the way I'm throwing the ball - I'm pleased with the way it's going so far," Eveland said. "I don't think I've ever won my first two starts in a season, so that's nice. Hopefully, I can just keep rolling with it."

The Blue Jays took to the field Thursday night having suffered twin attacks to their pride the previous day. Toronto was routed 11-1 by Chicago on Wednesday, enduring the added indignity of losing in front of the smallest crowd the team had ever drawn to Rogers Centre, with only 10,610 fans in the stands.

Attendance was not much stronger on Thursday - 10,744 - but there was no comparing the results on the field. Toronto chased Chicago starter Freddy Garcia to the showers after only three innings of work, beating him for eight hits and seven earned runs.

Travis Snider led the parade with his first home run of the season, blasting a solo shot over the fence in right field in the second inning. Toronto added three more runs in the third and turned up the heat even more in the fourth.

Utility man Mike McCoy scored Snider when he sent a shot to left field that bounced off Juan Pierre's glove at the fence. Gonzalez scored McCoy and Jose Bautista on a double to take a 7-0 lead.

Toronto's ability to generate runs had been raised as a concern before the game, as Gaston lamented the continued absence of second baseman Aaron Hill. The 28-year-old, who set career highs in home runs (36) and runs batted in (108) last season, has been placed on the 15-day disabled list with a tender hamstring and is not eligible to return until next week.

"You're always going to miss a bat like that," Gaston said. "He's getting real close to coming back. We'll just try to keep our head above water until we get him back, and hopefully he comes back swinging the bat like he did last year."

Eveland, meanwhile, did his best to relieve the pressure on Toronto's offence. He held the White Sox at bay through four innings, faltering only once in the fifth, when catcher Donny Lucy drilled a 1-0 pitch over the wall for the first home run of his major league career.

It was a solo shot, but it marked the beginning of the end for Eveland. He was pulled after walking Andruw Jones in the seventh inning, only to watch reliever Shawn Camp surrender a two-run home run to shortstop Alexei Ramirez two batters later.

"I was real good for the first five innings," Eveland said. "In the last inning-plus I threw, I wasn't great, but managed to get through. So, I mean, I'm kinda pleased with the way it went."

NOTES: Fresh off signing goaltender Jonas Gustavsson to a two-year contract, Toronto Maple Leafs general manager Brian Burke made a visit to Rogers Centre to chat with Gaston during batting practice ... Gaston said third baseman Edwin Encarnacion will likely miss "a couple of days" with soreness in his throwing arm ... Toronto and Chicago players all wore No. 42 on the back of their jerseys as part of Jackie Robinson Day. "Without Mr. Robinson, I wouldn't be sitting here," Gaston said. "President Obama would not be the President of the United States."