Romero allows one hit in 4-2 win over Sox 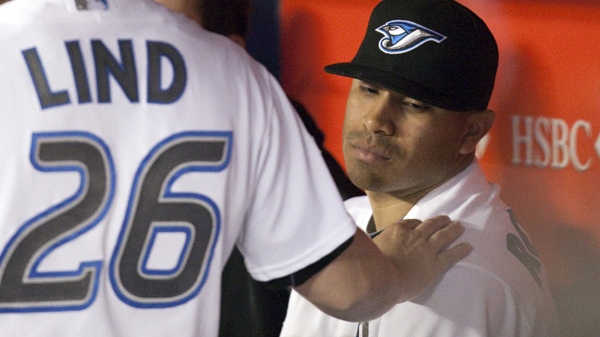 Toronto Blue Jays starting pitcher Ricky Romero is consoled by teammate Adam Lind after giving up a two run homer to Chicago White Sox Alex Rios in eighth inning AL action in Toronto on Tuesday April 13, 2010. Romero had a no hitter going to that point. (Frank Gunn / THE CANADIAN PRESS)

TORONTO - Toronto Blue Jays pitcher Ricky Romero gently tipped his cap to the crowd as he left the field for the last time, but slammed his glove into the dugout wall seconds later, furious over the no-hitter that had just slipped through his grasp.

The 25-year-old left-hander had dominated the Chicago White Sox into the eighth inning Tuesday night, flirting with what would have been only the second hitless outing in franchise history. His bid ended on the bat of former Blue Jay Alex Rios, who sent a pitch over the fence in left field.

Toronto held on for a 4-2 win over Chicago. The home run was the only hit Romero allowed, en route to a memorable night in which he struck out a career-high 12 batters while recording the 19th one-hit game in Blue Jays history.

"I don't think, the words I said, I could say them on camera," Romero said with a smile after the game. "It's one of those things where you feel it's so close - and you know you're so close - and to let it get away like that, it definitely sucks."

Reliever Kevin Gregg was called upon for the save, one night after closer Jason Frasor blew his second save of the season. It was an easy night for the bullpen, with Romero having gone eight full innings.

"He's just getting better all the time," Blue Jays manager Cito Gaston said. "I have to keep saying the same thing about him - and what a great kid he is, too. He's a nice kid, and I'm real proud of him. Real happy for him."

Dave Stieb became the first (and so far only) pitcher in Blue Jays history to throw a no-hitter when he shut out the Cleveland Indians on Sept. 2, 1990. Stieb, whose name has since been fastened to the wall inside Rogers Centre, only reached the milestone after five one-hit outings.

Toronto has come close in the intervening two decades, with Dustin McGowan losing a no-hit bid in the ninth inning of a game three years ago. Roy Halladay posted a one-hit game last season, his last in a Blue Jay uniform.

Toronto broke through in the third inning Tuesday when Vernon Wells added to his strong start to the season with a double to deep left field. The oft-maligned veteran advanced to third on the throw, scoring shortstop Alex Gonzalez for his 10th RBI of the young season.

Wells scored when Lyle Overbay singled to right moments later, lifting the Blue Jays to a 2-0 lead. The crowd murmured in appreciation, having been reduced to only 12,167, the size of a small town removed from the boisterous 46,321 who gathered for the home-opener on Monday night.

Romero thrived in the relative silence.

"It was one of the most dominant performances I've seen as a Blue Jay," Wells said. "It was fun to be a part of."

Romero tore into the White Sox from the moment he stepped on the mound, striking out two of the first three he faced in the first inning. He went on to strike out six of the first nine men he saw at the plate, and did not allow a single Chicago player on base until he walked outfielder Carlos Quentin in the fourth inning.

Romero had arrived at spring training as one of only two pitchers guaranteed a spot on Toronto's starting rotation, along with eventual opening-day starter Shaun Marcum. He won 13 games as a rookie with the Blue Jays last season, despite missing more than a month with an oblique strain.

Romero returned to the mound, with the increased lead in his back pocket, and retired the side in the fifth inning. He did the same in the sixth, and escaped the seventh inning with a walk and a deep fly to centre.

NOTES: Actor Brendan Fraser threw the ceremonial first pitch. Fraser attended Upper Canada College in Toronto (Class of '87), three decades after Ted Rogers (Class of'51), the late chief executive of Rogers Communications Inc., which owns the Blue Jays ... Toronto GM Alex Anthopoulos said pitcher Dustin McGowan has still not resumed throwing after being shut down to rest a tired arm in the last week of spring training. The 28-year-old has not pitched in a regular season game since July 2008, when he underwent surgery to repair a frayed labrum in his shoulder. "It's one of those things, that we want to be more conservative than anything else," Anthopoulos said. "He's feeling better, but we don't want to rush him back to get sore again."