Dozens of candidates running for re-election are sitting on investment properties that are surging millions in value as a housing crisis takes hold across Ontario, according to a review of disclosures by CTV News and a new home valuation tool.

And those eye-popping gains — to at least $36.5 million in investment properties alone according to Canadian app HouseSigma’s Home Valuation feature — is prompting tough questions from critics over whether those assets could be one reason leaders are not taking more action on the housing file.

“It’s no surprise to anyone living in Ontario that housing prices have literally gone through the roof,” said Bilal Akhtar of the pro-affordability group More Neighbours Toronto, who said large investments in the housing market could amount to a conflict of interest.

“Anyone who benefits from home price appreciation are not going to prioritize this. They are going to say, I can push this construction 10 years down the road,” he said.

MPPs in Ontario disclose that they own investment properties, but not exactly where. So CTV News Investigates had to dig into land title records and other sources to find more than 40 properties, owned by 25 MPPs in the most recent parliament.

Once we had identified the properties, HouseSigma’s machine learning and artificial intelligence came in with estimates about what the properties are worth today.

Of the properties we identified, 23 were owned by MPPs elected as PCs, 15 by NDP MPPs, and three by Liberals. The Green party confirmed that Mike Schreiner does not have an investment property. 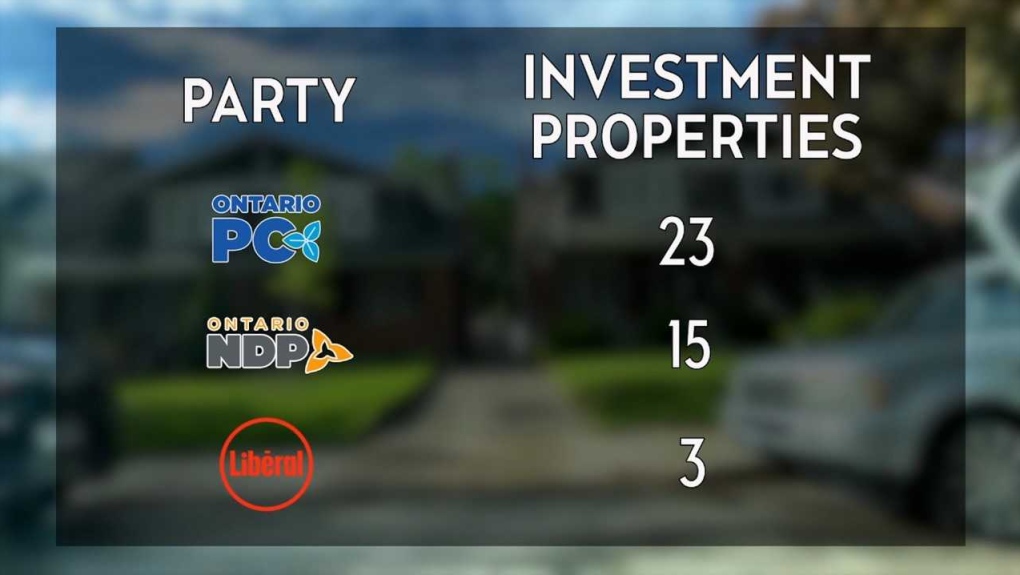 For example, Willowdale PC Candidate Stan Cho has four investment properties. The two that we could value are worth an estimated $2.3 million today.

In Scarborough, NDP Candidate Doly Begum’s portfolio of four properties, which she shares with her extended family, rose $2.49 million since purchase to $4.41 million today.

Former Liberal Premier Kathleen Wynne declared two investment properties, which have more than doubled in value since purchase, to $1.5 million.

Former PC MPP Roman Baber — who was removed from caucus in 2021 over his opinion on COVID-19 lockdowns — appeared to have the largest portfolio, with three homes valued together at $5.21 million, a surge of about $2 million since he purchased them.

Many of these properties are over and above any properties they own as their residence, as a recreational property, or as a property they use to live in Toronto during legislative sessions.

Of the properties bought in the past 10 years, prices have jumped about 77 per cent — a windfall of about $4.7 million on paper.

That’s a figure that has some Ontarians wondering about the impact that amount of money has on our legislators making decisions.

“If you are someone who makes money off the housing market in a direct way, you have a very clear conflict of interest,” said Marguerita Kaliazina, speaking on Danforth Avenue in Toronto.

Reached at a press conference in Hamilton, PC Leader Doug Ford — running to keep his job as premier — said his government had acted to rein in prices.

“I don’t think we’re slow. To the contrary,” he said, pointing to housing starts figures he argued shows there was an increase in housing supply. “Our goal is to cut through the red tape and work collaboratively with municipalities because they’re the ones issuing the permits.”

Ontario’s Housing Affordability Task Force found that house prices have almost tripled in the past 10 years, growing much faster than incomes.

Ford has embraced the 1.5 million homes figure, but has balked at other recommendations of the task force, including adding density in cities and ending exclusionary zoning, which Akhtar said had been left out of legislation introduced in March.

“What they all seem to be lacking is understanding the severity of this crisis and the urgency,” Akhtar said.

The Ontario Real Estate Association, which represents realtors in Ontario, called on all parties to make sure future generations have a chance to own a home, including measures to double the land transfer tax rebate for first time buyers, end exclusionary zoning, and getting dirty money out of Ontario real estate.

“You tended to think that if you played by the rules you could afford a home in the neighbourhood you grew up in,” said OREA CEO Tim Hudak in an interview. “That’s not the case any more.”

Ontario’s NDP have also embraced the goal of 1.5 million new homes, saying in their platform they would end exclusionary zoning and increase the supply of affordable housing in pedestrian and transit-friendly neighbourhoods.

The Ontario Liberals also point to the 1.5 million new homes in their platform, saying they will create an Ontario Home Building Corporation, and allow homes with up to three units and two stories to be built as-of-right across Ontario, including secondary and laneway suites.

While investment properties are one way of measuring wealth owned by MPPs, homes themselves store immense wealth: an an example, records show both Liberal and PC candidates running against Doly Begum in Scarborough Southwest appear to own homes worth in the neighbourhood of $2 million.

Russian missile attacks on residential areas killed at least 21 people early Friday near the Ukrainian port of Odesa, authorities reported, a day after the withdrawal of Moscow's forces from an island in the Black Sea seemed to ease the threat to the city.

A lack of programs to certify lifeguards amid the COVID-19 pandemic is contributing to the industry-wide shortage seen in Canada, a Toronto city official says.