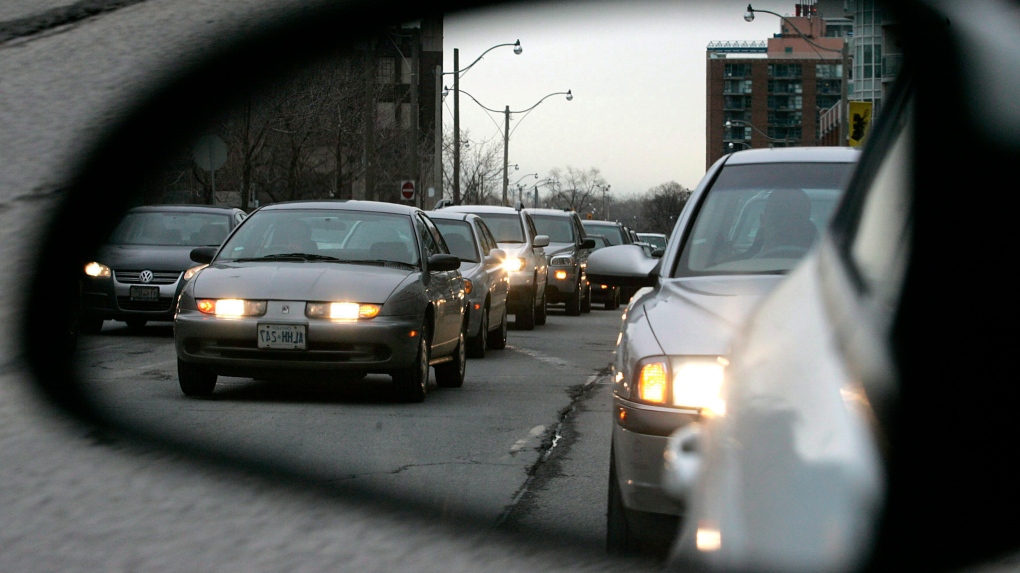 Commuters are reflected in a rearview mirror while sitting in rush hour traffic in Toronto in this March 4, 2008 photo. (J.P. Moczulski/THE CANADIAN PRESS)

TORONTO -- New data released by the City of Toronto shows that traffic volumes are now at their lowest levels in several months following the province's lockdown announcement in late November.

According to the traffic data, which was released on Friday, ‘Watch Your Speed’ signs in the city’s school zones showed that traffic volumes during 5 p.m. to 6 p.m., the afternoon peak, dropped to 68 per cent of normal volumes during the spring lockdown, climbed to as high as 87 per cent in the early fall, and have now dropped back down to 73 per cent.

The speed signs registered a similar pattern during the morning peak from 8 a.m. to 9 a.m. During the spring lockdown, volumes dropped to 44 per cent of normal conditions, increased to about 80 per cent in the early fall when schools reopened, and have since dropped down to 52 per cent as schools in southern parts of the province remain closed.

“While the signs are not representative of traffic on all roads, they do provide a snapshot of changes in neighbourhoods across Toronto,” a news release issued by city staff read.

Technology used to measure traffic volumes downtown showed that during the spring lockdown, daily vehicle traffic dropped to 44 per cent of typical volumes, shot up to 73 per cent by the fall, and have dropped to 63 per cent since new public health measures were introduced by the province.

“It (the traffic data) just suggests we are not doing quite as well as we did in the spring but that there has certainly been a big change since the fall,” Mayor John Tory told CP24 on Friday morning. “We are going to be monitoring this every week, same with the phone data.”

The recent phone data, Tory said, indicates that 82 per cent of people are staying home compared to 87 per cent in the spring.

“That suggests that again in the spring there were more people staying home so I just hope people heed the message, which is stay home, keep your distance, wear a mask,” he said.

It should be noted that there are considerably more businesses that are permitted to be open during the current lockdown than during the first few months of the spring lockdown.

Non-essential retail stores were not permitted to open for curbside pickup until May and all film and television production was halted during the spring lockdown.

Pedestrian traffic also appears to have declined from levels reported during the summer and fall. During the first lockdown, pedestrian traffic dropped to 17 per cent of typical volumes, climbed to 30 per cent by the fall, and is now back down to 21 per cent since the new lockdown was implemented.

“We are understanding of the fact... that you need to have some exercise, you need some fresh air,” Tory said. “A lot of the time you just need to get out if you live in an apartment or condo, but we are asking you obviously do that only with people you live with."