Disney Plus streaming service will launch in Canada this November 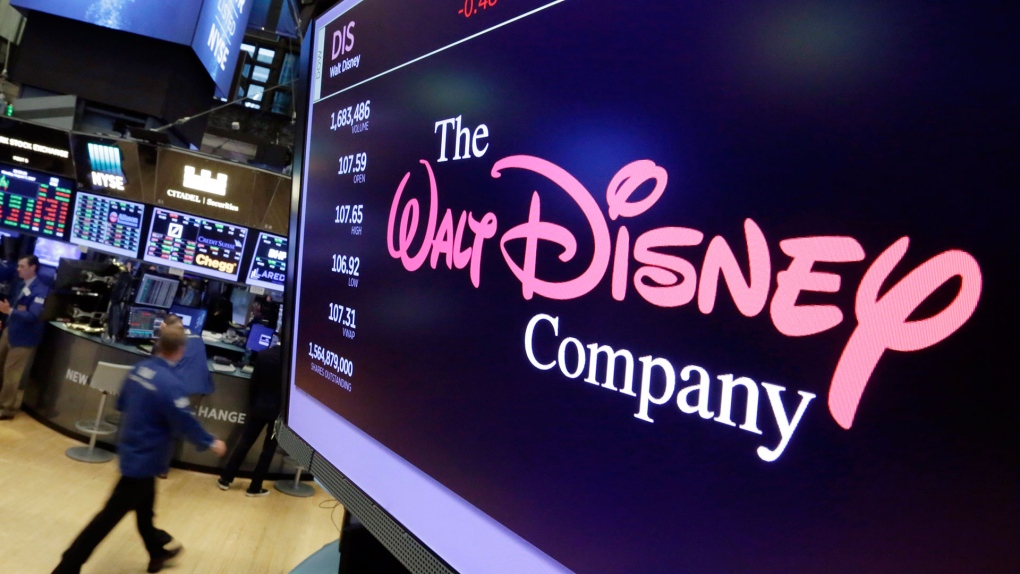 In this Aug. 8, 2017, file photo, The Walt Disney Co. logo appears on a screen above the floor of the New York Stock Exchange. (AP Photo/Richard Drew, File)

TORONTO -- The Walt Disney Company is swooping into the Canadian market with its powerful new streaming platform Disney Plus in November, and analysts say the menu of Marvel superheroes, Pixar characters, and Disney animated classics could give viewers another reason to drop cable altogether.

Even though the platform will not be available here as a bundle deal -- in the United States, the service will be packaged at a discount with Hulu and ESPN Plus -- there's still plenty of programming that could entice Canadian audiences.

"Some of those households will look to shave the cord -- or cut the cord for that matter -- over and above the intentions they might've had prior to Disney."

While the Canadian streaming video market has been competitive for years, with Netflix as the dominant player and Bell Media's Crave and Amazon Prime Video also in the mix, the arrival of Disney will be unprecedented.

On top of Marvel, Pixar and its animated library, the company owns the rights to Star Wars, as well as many TV shows on U.S. network ABC, including "Grey's Anatomy," "How to Get Away With Murder" and "Lost."

Disney also recently purchased rival Hollywood studio Twentieth Century Fox Film Corp., giving them access to decades of film and TV, including action hits like "Die Hard," and classics such as "The Sound of Music." Add to that some of this year's biggest movies, including "Avengers: Endgame," "Aladdin" and "Toy Story 4," which are expected to eventually land on the service.

The initial slate of titles that'll launch on Disney Plus in Canada hasn't been announced, but the company has teased some projects in the works. It'll update the "Home Alone" and "Night at the Museum" franchises exclusively for the platform, as well as remake "Lady and the Tramp."

Disney is banking on its appeal out of the gate, and unlike many of its predecessors, Disney Plus will launch across nearly all major mobile and connected TV devices. That'll give viewers an opportunity to sign up whether they use Apple, Google, Microsoft, Roku or Sony products.

Brahm Eiley, president of consultancy firm Convergence Research, says many questions linger about how Disney Plus will look in Canada. In particular, he wonders if viewers will feel the service's programming slate pales in comparison to the U.S.

It's a criticism that hindered Netflix for years after it launched in Canada.

Original programming created for Disney Plus will be available in all territories, said Disney spokeswoman Jessica Casano. However, existing licenses with other streaming platforms and broadcasters will impact the selection of other films and TV shows on the service.

"We are continuing to refine our content investment strategy for each market," Casano added in an email.

The Canadian video streaming landscape is shaping up to become intensely competitive in the coming months, with Apple Inc. still on deck to launch its own service dubbed Apple TV Plus. The tech company has lined up series from marquee names including creators Steven Spielberg and J.J. Abrams, a drama starring Reese Witherspoon and Jennifer Aniston called "The Morning Show" and a number of documentary specials from Oprah.

But with so many platform options, navigating where each show is available could become very complicated.

For instance, Disney has a broadcasting deal with Toronto-based media company Corus Entertainment, which operates the Disney Channel and several other family channels that carry many of its new shows, such as "Girl Meets World" and "Ducktales."

"Corus will continue to exclusively offer first-run premieres of the newest series, specials and Disney movies on Disney Channel, Disney JR and Disney XD in Canada, airing day and date with the U.S.," she said in an emailed statement.

Eiley suggests that'll put the onus on viewers to do their own homework and figure out which shows are on which platform.

"Consumers are going to have to be more savvy in terms of what they're actually getting," he says.