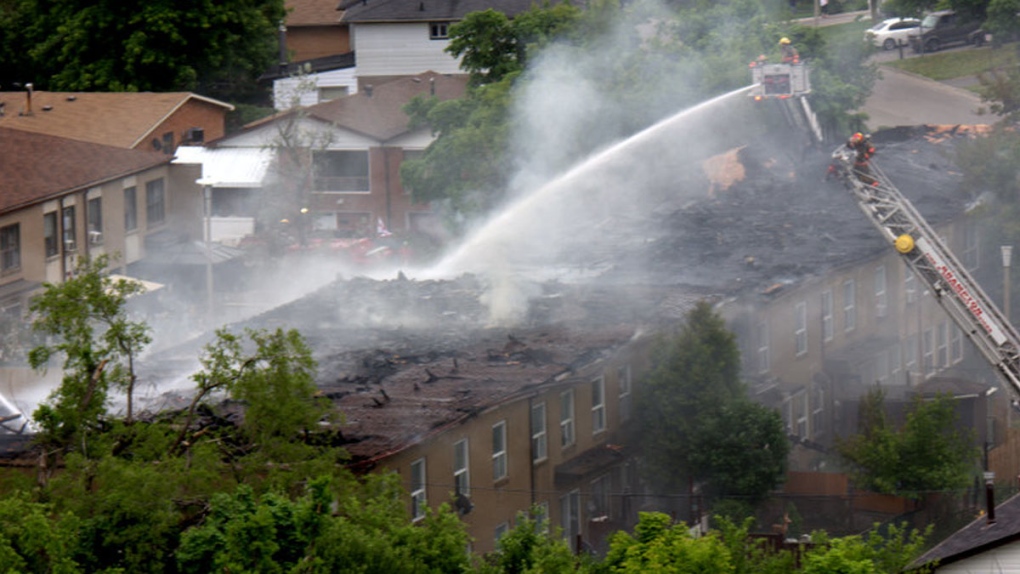 For the second time in less than two years, residents of Brampton’s Ardglen Drive neighbourhood are dealing with the tragic death of a child, as the community comes to grips with the loss of a 10-year-old boy in a townhouse fire on Sunday.

Police say Nicolas Gabriel had been sleeping over at a friend’s house when a fire started in one of the townhouses and spread through the rest of the homes. The family he was staying with made it out. Nicholas did not.

The boy lived in the same series of townhouses where Kesean Williams, 9, was shot and killed while watching TV just over a year ago.

The townhouses are near Kennedy Road South and Clarence Avenue. The two boys would have been neighbours, even schoolmates, as both lived close to Sir Winston Churchill Public School.

Now, Kesean will again be on people’s minds as they discuss this latest tragedy.

“This is a neighbourhood that has not healed from losing young Kesean,” Brampton Mayor Susan Fennell said on Sunday.

Jamie Holtom, a minister at the North Bramalea United Church, said the 10-year-old boy’s family is still in shock from the news after Sunday morning’s fire.

“They are still trying to catch up to what’s happening here,” he said.

“It’s a really really difficult time for them right now.”

The church’s community outreach program has already joined the effort to support the boy’s family and all those who lost their homes in the fire.

“We said to them that we’re going to walk with them no matter what the future holds,” Holtom said.

“We want them to know they’re not alone.”

Mayor Fennell said the tight-knit community will rally around this tragedy, just as they did last year to support Kesean Williams’ family.

Kesean was shot on Jan. 23, 2013, just a few doors down from the townhouses where Sunday’s fatal fire occurred. That shooting, like the fire, was deemed a tragic accident. Police said at the time that the house was targeted, but that the boy may not have been the intended victim. Kesean’s family had moved into the house just three days before he was killed.

After Kesean’s death, the community went into mourning. There were tears, vigils, and a wall full of teddy bear donations as people lamented the nine-year-old’s death. A trust fund was also set up for Kesean’s family.

Now, the Ardglen community must come together again as it deals with the death of another child, along with the loss of as many as 100 people’s homes.

“This is a very tight community,” Fennell said. “These are good families that live here and they deserve a good place to live, and many people have lost their homes today. They’ve lost everything.”

Support has already started to pour in for families affected by the fire. The Red Cross, the Salvation Army and the North Bramalea United Church have all joined in the relief effort, and people on social media have offered to help in whatever way possible.

Many of those affected by the fire did not have tenant insurance, the mayor said, and the best way to help them is to provide financial relief.

Holtom echoed those sentiments. “What we really need, I think, for the families now are financial resources,” he said.

“People will rally around this family,” Fennell said. “What you’re seeing is the true heart of the people of Brampton.”