COVID-19 variants likely to make up 40 per cent of Ontario cases by mid-March, hospitalizations expected to climb

TORONTO -- Highly-contagious COVID-19 variants are expected to make up about 40 per cent of all Ontario cases by the second week of March, new modelling data suggests, leading to a likely increase in daily infections and hospitalizations.

The new projections released by health officials Thursday predict the province could see about 4,000 new infections daily by the end of next month in the worst-case scenario.

In a more likely scenario, Ontario could see about 2,500 cases a day within that time frame and in the best-case scenario, the number could decrease to about 500 daily infections.

“There is a period of remaining risk before the pandemic likely recedes in the summer,” the modelling presentation said. “The major challenge becomes how to protect the health system over the next few months and closely monitor the spread of all types of cases while accelerating vaccinations.”

Near the end of January, officials said that COVID-19 variants of concern made up about five per cent of COVID-19 cases. A month later, that number has jumped to about 20 per cent.

Speaking at a news conference Thursday afternoon, Dr. Adalsteinn Brown, co-chair of the province's COVID-19 science table, used the analogy of a “minefield” to describe the threat posed by the variants of concern.

“Case numbers are down and the extended stay-at-home order in the GTA has been a powerful protection against more rapid growth, but the worst dangers are immediately in front of us,” Brown said. “Case rates are already rising in some of the public health units again and the new variants of the virus are another serious hazard ahead of us. In the United Kingdom, cases tripled in a month before a much more serious lockdown brought them back under control. A big jump in mobility or a big increase in gatherings will create the same kind of dangers for us.”

“Simply, we need to watch our every step. There is no easy path through a minefield. Just care and caution with each step.” 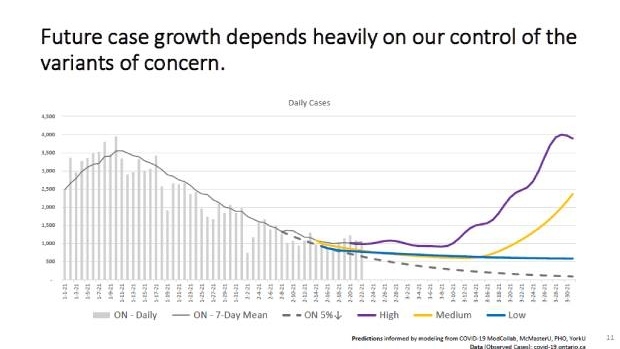 As of Thursday, there have been 462 confirmed cases of COVID-19 variants in Ontario. The majority of variant cases have been labelled as B.1.1.7, the mutation originally found in the U.K.

Thousands of positive COVID-19 samples have been screened for the variants, officials said, resulting in a positivity rate of about 11.3 per cent.

Over the last two months, Ontario has seen a significant decrease in daily COVID-19 infections. In January, officials were reporting anywhere from about 4,000 infections a day to 1,800 a day. In February, that number continues to dip.

New infections and deaths in long-term care homes have also declined, the modelling suggests. Officials say there have been 20 resident deaths in the last seven days.

Officials credit the decrease in daily infections in part to public health restrictions that restricted movement across the province. This includes the province-wide lockdown and the stay-at-home order.

However, after four straight days of daily COVID-19 case counts in the triple digits, the number of daily infections has, for the most part, remained just above 1,000.

Two weeks ago, officials recommended that strong public health measures should remain in place in order to prevent a third wave.

Since then, all but three regions in Ontario have transitioned out of the stay-at-home order to the province’s colour-coded lockdown framework. Even under the strictest tier of the framework, some businesses would be allowed to reopen, albeit with limited capacity restrictions.

The stay-at-home order was extended in Toronto, Peel Region and North Bay until at least March 8.

The decline in daily COVID-19 infections, hospitalizations and ICU admissions has “started to level off,” the modelling suggests.

In the worst-case scenario, the number of COVID-19 patients in the ICU could rise back up to the 350 benchmark by the end of March.

The province said that once the number of patients in intensive care gets to 150, it becomes harder to support non-COVID-19 needs in hospitals. Once it exceeds 350 people, it becomes "impossible" to handle.

In the two better scenarios, the number of admissions to the ICU remains around 150 patients, although Brown added that the province has seen its “fourth straight day of increases in ICU occupancy.” 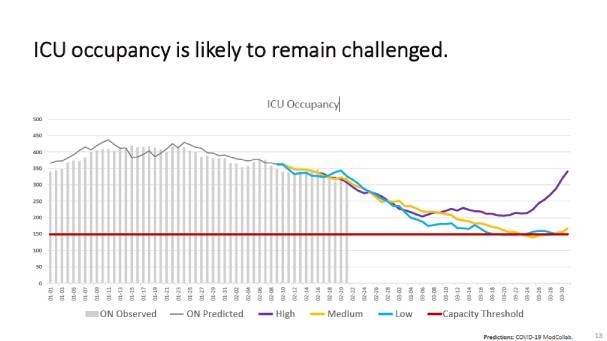 According to Brown, hospitalizations and ICU admissions “will likely soon increase” as the COVID-19 variants spread across the province.

“We see this consistently across virtually every model that we run,” he said.

Health officials have said that they will be monitoring the spread of the various COVID-19 mutations over the next few weeks, and that the data collected will be “critical to understanding the impact of the variants.”

Brown said that the lockdown measures, while challenging, have helped reduced the spread of COVID-19 over the last two months, noting that the data shows “a clear improvement and a clear path forward.”

He said that while there will likely be “flare ups” within the community and in congregate settings, if public health measures are applied properly, Ontario residents should be able to experience “a better summer.”

“The path ahead is clear that we could have a much better summer,” he said. “But we do need to be ready, and we do need to respond very quickly to how the pandemic changes, and we'll get a better read on some of that over the next couple of weeks.”