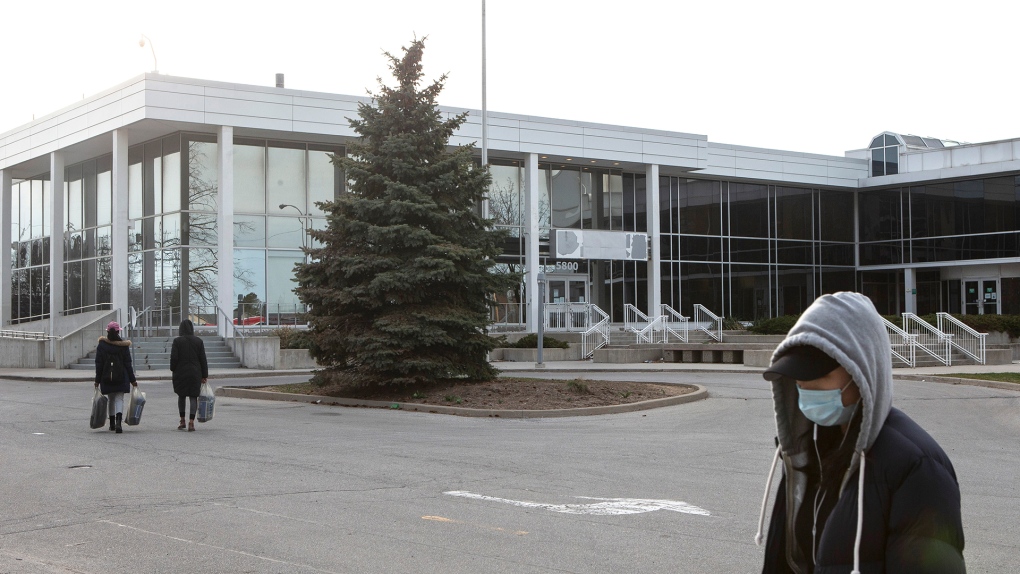 The Willowdale Welcome Centre in Toronto is seen on Monday April 20, 2020. The centre, which provides shelter for refugees, has reported 74 cases of COVID-19. THE CANADIAN PRESS/Chris Young

TORONTO -- The spread of COVID-19 has disproportionately affected immigrants, refugees and those who live in low-income neighbourhoods in Ontario, a new report has found.

The report released Wednesday by ICES, a not-for-profit research institute focusing on health-related data in Ontario, found that while immigrants and refugees in the province accounted for only about a quarter of those tested for COVID-19 between January and June, they represented 43.5 per cent of all positive cases.

“We document disproportionately higher rates of infection among those who landed in Ontario as economic caregivers, refugees, those with lower levels of education and language fluency, those who currently live in lower income neighbourhoods and with more crowded housing,” Dr. Astrid Guttmann, Chief Science Officer at ICES and lead author on the report, said in a statement.

“Apart from addressing many of (the) root causes of higher risk of infections, very high test positivity in certain groups of immigrants also suggests that there may be important barriers to testing that will be important to address if there is a second wave in Ontario this fall.”

The data was pulled from test results conducted between January 15 and June 13. According to the report, rates of testing were lower for most immigrants and refugees compared with Canadian-born and long-term residents—with an exception for economic caregivers who tend to work in health-care and were prioritized for testing.

The data found that of the 4.4 per cent of Canadian-born and long-term residents tested for COVID-19 in Ontario, 2.9 per cent tested positive.

Of the 3.4 per cent of people who identify as immigrants or refugees who were tested for COVID-19, 8.1 per cent received a positive diagnosis.

Refugees alone had the highest positivity rate within that time period at 10.4 per cent. 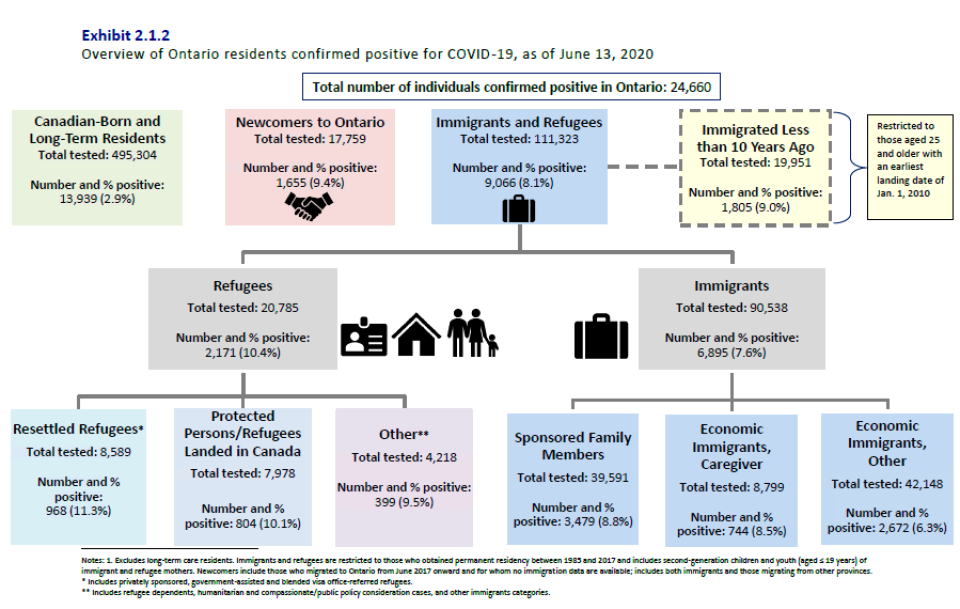 The report also found that while testing positivity peaked at the beginning of April among Canada-born and long-term residents, there were two “pronounced peaks of positivity” for immigrants, refugees and newcomers in April and May respectfully.

“The pandemic has sharpened the focus on structural and societal inequalities that have long existed,” the report reads. “These inequities put many racialized and immigrant populations at higher risk of both contracting the infection and suffering poor outcomes.”

The highest rates of positivity in Canada were found in racialized immigrants and refugees from Central, Western and East Africa, South America, the Caribbean, Southeast Asia and South Asia, the report found. The rates were also higher for those living in low-income neighbourhoods.

What data was available and what was missing?

The general findings presented in the report are not necessarily new. Advocacy groups have been calling on all levels of government to support the gathering of race and socio-economic data for months, arguing that marginalized communities are disproportionately contracting or dying from COVID-19.

As a result of these calls, the City of Toronto began collecting race-based data in May.

Toronto Public Health said that of the data collected between May 20 and July 16, 83 per cent of known COVID-19 cases involve members of racialized communities.

It also found that patients with a household income level of $50,000 or less represents more than 50 per cent of reported infections in the city, despite the fact that the 2016 census revealed only 30 per cent of Toronto’s population reported being in that income bracket.

The data released by city officials are based on voluntary questions collected by a local public health unit.

Provincially, officials and politicians have all said they support the collection of race and income-based data, but they have yet to provide any information about the trends they are seeing.

In mid-June, the government proposed regulatory changes that would allow those who test positive for COVID-19 to be asked about their race, income, languages spoken and household size.

The questions are optional and the government said personal privacy would be protected. Since then, not much has been said about the data collection.

The ICES report said they were limited in the creation of the report by incomplete immigration data and could only include information on immigrants or refugees who landed in Ontario from January 1985 to May 2017 and who became permanent residents. They also included second-generation immigrant children under the age of 19 who were born in Ontario to permanent residents.

A “newcomer,” a status defined separately from an immigrant or refugee, is described as an individual who became eligible for OHIP after May 31, 2017.

New @ICESOntario report shows immigrants, refugees and other newcomers account for nearly 44% of all COVID-19 cases in Ontario https://t.co/j0QzutHiJh pic.twitter.com/4VyDhiZQzW

The authors also noted that ICES lacked data on “important risk factors for testing and positivity” such as occupation and living conditions.

“We currently do not have comprehensive data on important outcomes such as hospitalization and death,” the report says. “We have data on demographic and some census-based characteristics but not on the critical structural factors that play an important role in shaping inequities.”

ICES was able to access information on the health-care sector. The report found that employment as a health-care worker, especially among women, accounted for a disproportionate number of COVID-19 cases among immigrants and refugees. Among the 36 per cent of women employed as health-care workers and who tested positive in Ontario, 45 per cent were within that demographic.

Inequities ‘are complex’ and often rooted in racism

The report suggests that the “causes of these inequities are complex and often rooted in social and structural inequities, including systemic racism.”

It notes that a large proportion of immigrants, refugees and newcomers to Canada hold temporary or minimum-wage jobs at facilities where physical distancing is difficult. These positions may also not have paid sick leave or other health benefits.

ICES says that employment in any of these sectors— such as occupations in retail, factories or transportation– “is considered precarious” and could impact testing and quarantine.

Other factors such as language barriers, education and accessibility to quality healthcare could impact whether a person gets a COVID-19 test.

The not-for-profit is calling for more accessible testing options ahead of a possible second-wave in the fall as well as better training and enforcement of safety measures for those at risk of COVID-19 exposure in the workplace.

“A continued focus is needed on securing funding to house those who cannot safely quarantine in their homes or are homeless, as well as for income supplements for workers must quarantine who do not have employer-sponsored sick leave,” the report says.

The report also noted that the findings should be interpreted in the context of Ontario’s testing strategy. Initially, local public health units were only testing those in essential workplaces, those who had recently travelled and for those with acute medical conditions. Later that strategy evolved to include long-term care homes, hospitalized patients, and the general population, including asymptomatic patients.

“This means that some groups are over-represented in the testing numbers and that positive cases include those who were symptomatic at the time of testing, as well as those who were asymptomatic,” the report says.

“This may distort some associations of characteristics with both testing rates and potential to test positive. It also means that there is an unknown number of untested infected individuals in the general population.