Couple asked to leave Toronto condo because they're not married

TORONTO -- A couple renting a condo in downtown Toronto say they have been told by the condo’s management they need to get married — or get out of their unit.

The dispute seems to stem from the condo’s interpretation of a rule restricting the occupants to “single families” — apparently designed to keep out short term rentals or disruptive tenants — but has been taken too far, said one of the renters, Michael Cowan.

“How can they define what a family is to someone?” Cowan told CTV News Toronto in an interview. “It doesn’t make sense.”

The dispute has some observers wondering how widely these rules have been applied and how many of Ontario's two million condo residents they could affect. The province’s opposition NDP is also calling for changes to condo regulators.

Cowan, who is in his thirties, said he moved into the condo at Wellesley and Bay streets in the spring of 2020, loving its central location.

This October, he decided to invite his partner of about six months to live with him. He moved in, signed paperwork with the landlord, but when it came to updating the condo board about who was living in the unit, they suddenly had a problem: the condo was asking for a marriage certificate.

“[Management] said we needed proof of marital status, which we do not have because we’ve only been together for a shorter period of time,” Cowan said. He said since the conversation, the condo has deactivated his partner’s key fob.

That action seems to stem from a condo rule, where Metropolitan Toronto Standard Condominium Corporation No. 972 defines itself as “single family,” which “shall mean a social unit consisting of parent(s) and their children, whether natural or adopted, and includes other relatives if living with the primary group.”

“The requirement for a marriage certificate just blows me away,” Opal said. “Family status shouldn’t be grounds for discrimination. And I feel that living next to the Village, my condo board and property manager are discriminating against individuals who don’t fit into a certain mould.” 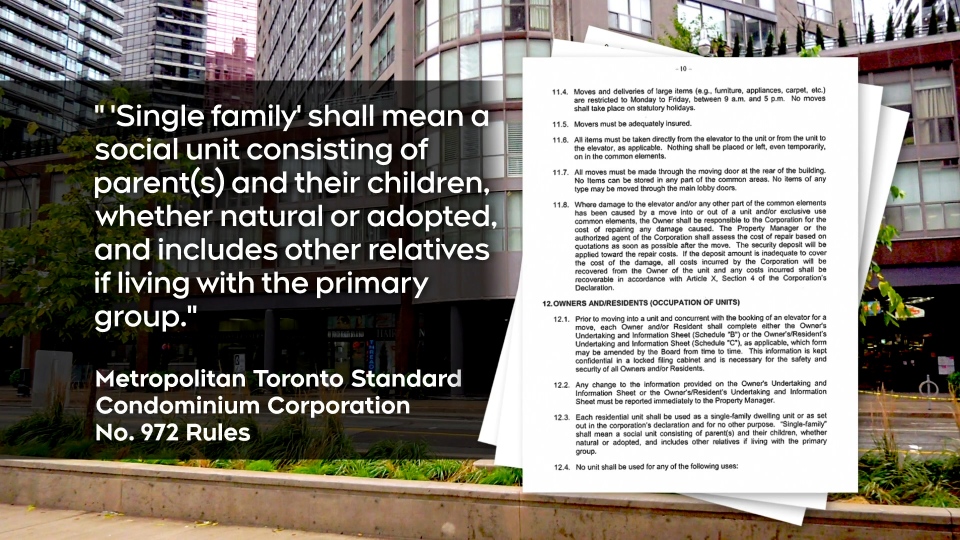 It’s not clear exactly why the rule exists — condo management didn’t get back to CTV News Toronto on Tuesday.

Condo lawyer Shawn Pulver, who is not connected to the case, says the root of the rule is likely to find a way to ensure that disruptive tenants or short term rentals aren’t allowed.

He says the backlash against some short-term rentals could mean that there are many similar rules affecting more than two million people who live in Ontario condos.

“Condos are concerned that there are people in units that shouldn’t be there. It doesn’t mean the concerns are well founded or that they are not subject to challenge,” Pulver said.

NDP MPP Jessica Bell said disputes like this should be fielded by the Condo Appeal Tribunal, but it doesn’t have the jurisdiction, leaving residents heading to court -- or simply giving up.

Bell, who held a round table on condo issues earlier this week with other NDP MPPs, said she heard many residents complain about issues in their condominiums that aren’t being addressed in the current regulations.

She said she hoped that hearings slated to start this week to review findings by Ontario’s Auditor-General of weaknesses in condo oversight may also help address the problem.

“It’s ridiculous that people in 2021 have to prove that they’re married,” Bell said. “There should be a way for a resident to seek recourse, and appeal to a regulator to change the rules.”

Another option, said Opal, may be to just widen the definition of the rule to include couples like her renters.

“They could expand the definition to include two people in a loving relationship,” Opal said.