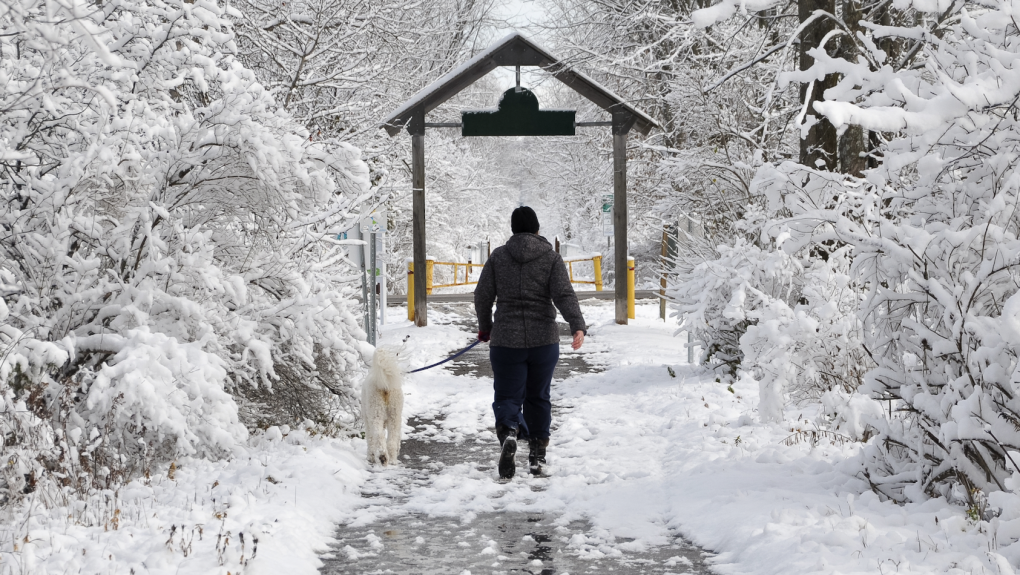 Back view of an owner and a pet dog walking in Toronto. (Lester69/Dreamstime)

Toronto Public Health (TPH) is looking to identify an owner and their dog that were licked and jumped on by a dog with a confirmed rabies case in early January.

The interaction occurred on Jan. 12, the agency says, when a brown, mixed labrador retriever, who has since tested positive for rabies, came in contact with an unidentified owner and their “bulldog-type dog” on Bison Drive and Regatta Crescent, near the intersection of Bathurst Street and Steeles Avenue West, in Toronto.

A statement issued on Tuesday by TPH says the labrador, who at the time did not appear sick, jumped up on and licked the unidentified owner of the bulldog-type dog.

On Jan. 19, TPH received a confirmation that the labrador has tested positive for rabies.

The agency is looking to speak with the owner of the bulldog “to assess their risk of exposure to rabies and, if needed, support preventative treatment.”

TPH says that all other human and canine contacts have been identified and contacted, with the exception of the bulldog-type dog and its owner, adding that the agency has “engaged in door-knocking and postering in the community, as well as contacted nearby veterinarians and Toronto Animal Services.” Because of this, the agency said the risk of rabies exposure to the general public remains very low.

According to TPH, the bulldog-type dog may have been named “Bulldozer” but says it’s unsure of the dog’s current name.

“Rabies is a viral infection that affects the nervous system of warm-blooded animals, including humans,” TPH said.

“If it is left untreated before symptoms appear, rabies will lead to death. The rabies virus is spread through the saliva of an infected animal, usually entering through a bite or more rarely a scratch.”

The agency says that rabies can not always be identified without testing, but that transmission and severe illness can be prevented after exposure by immunization. While effective, the vaccine must be administered before symptoms appear, they say.

TPH is encouraging all residents to take the following steps in order to reduce the risk of rabies exposure:

If anyone has any information on this incident, Toronto Public Health is asking them to contact the agency at 416-338-7600 fby email at publichealth@toronto.ca.

The sex assault trial of Canadian musician Jacob Hoggard is hearing from a limo driver who drove one of the complainants to and from the Hedley frontman's hotel in 2016.