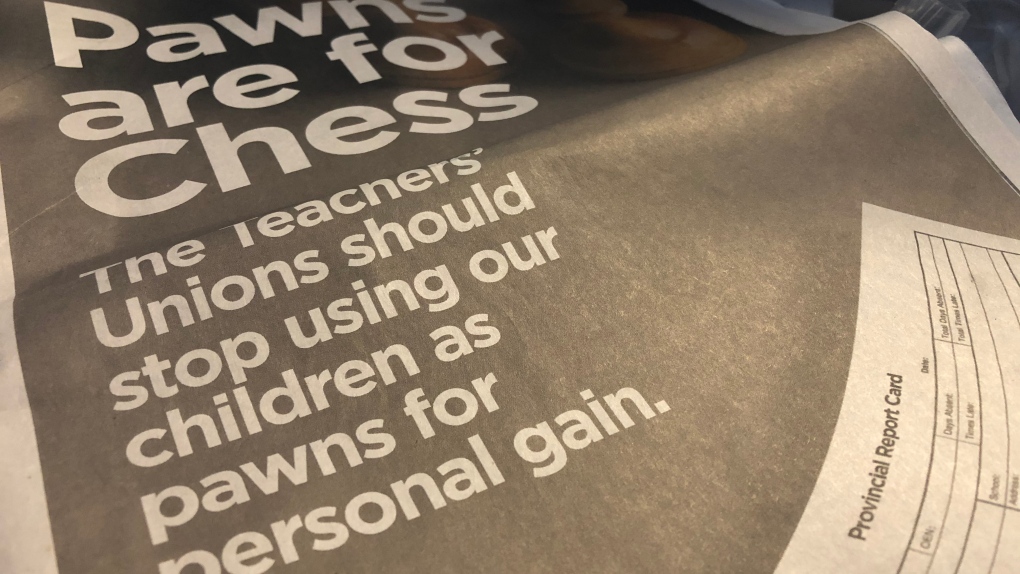 TRONTO -- A company, led by a large Progressive Conservative Party donor and political appointee, that took out full-page advertisements against striking teachers’ unions in February has been found to have violated Ontario’s Elections Finances Act.

The advertisements were published at a time where all four major teachers’ unions in the province were engaged in escalating job action as bargaining talks with the government stalled.

The advertisements varied slightly in each publication, but they all delivered a similar message opposing the strikes and appearing to support the provincial government.

In one of the ads, a woman was seen holding a provincial report card with a failing grade on it.

“Teachers’ Union leaders are risking student success. Children are not pawns,” the advertisement read, signing off with “a message from the Vaughan Working Families.”

A spokesperson for the Minister of Education Stephen Lecce’s office told CTV News Toronto the government was not connected with the ads.

The Ontario New Democratic Party asked for an investigation into the advertisements, saying they were published in two regions that were undergoing byelections and that the advertisements violated the province's election spending rules.

The letter, which was sent by the Manager of Compliance Enforcement at Elections Ontario Kevin Thomas, says there “has been an apparent contravention of section 37.5 and section 48 of the Elections Finances Act” and that Vaughan Working Families failed to register with Elections Ontario as a third party.

“The Chief Electoral Officer has therefore reported this matter to the Ministry of the Attorney General,” Thomas said.

If convicted, the penalty for the violation is a fine of no more than $5,000.

Who is Vaughan Working Families?

According to a report from the Toronto Star, one of the newspapers that carried the advertisements, invoices for the full-page ad were sent to a law firm by the name of Loopstra Nixon LLP.

Quinto Annibale, who has donated more than $31,000 to the PC party over the last six years and was appointed by the Doug Ford government as Vice-Chair of the Liquor Control Board of Ontario (LCBO) in 2019, is a partner at that firm.

In April 2018, Annibale incorporated a business called Vaughan Working Families and billed it as a “health care advocacy and public relations” firm on behalf of the Vaughan Health Campus of Care.

The official address for Vaughan Working Families traces back to Loopstra Nixon LLP.

At the time, the law firm confirmed that Annibale serves on the board of directors of Vaughan Working Families “in his personal capacity.”

“No other partner, lawyer or employee of Loopstra Nixon LLP had any knowledge of these advertisements prior to their publication, or made any contribution to the cost of these publications,” they said. “We regularly act as the legal registered office of organizations who do not have a physical place of business.”

When asked on Wednesday about the elections violation, Ontario Premier Doug Ford said that his government “had nothing to do with” the advertisements. He then went on to say that he doesn’t know Annibale or remember appointing him as Vice-Chair of the LCBO.

“Honestly, if someone gave me a million dollars right now, I don’t even know that person’s name,” he said. “They send me these pieces of paper, make sure they do their due diligence, I sign it and away it goes.”

“I guess it’s at the AG’s office and we will see what happens.”