A one-year-old child has been seriously injured after an explosion in a residential area in Brampton Tuesday afternoon.

The incident occurred around 1:30 p.m. near Humberwest Parkway and Cottrelle Boulevard.

Aerial footage from the scene showed severe damage to the back of a home. Peel Regional Police Const. Iryna Yashnyk said that the wall partially collapsed. 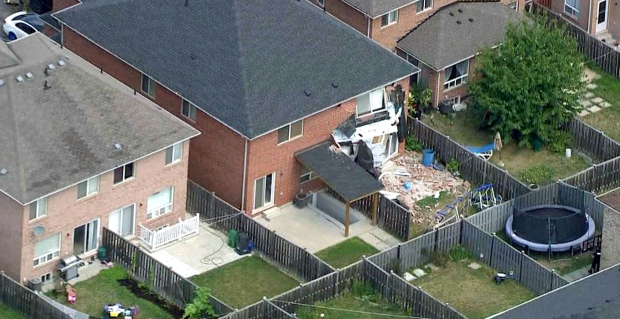 The injured child was taken from the scene to a local hospital for treatment. Peel paramedics said three adults were also “in moderate condition with burns.”

The scene is under control, police said.

"The houses in the immediate area were evacuated as a precaution, otherwise the area is unaffected," Yashnyk said.

Mike Papp lives next door to the home and said that he heard a young girl crying.

“I saw them inside the house,” he said. ”The girl was crying very badly so I right away checked on the girl if she's ok and then I called 911

“The whole family was coming out with burning skin and all. They were all yelling and crying,” another neighbour, Kahlid Sitto, said.

A fire inspector was on scene to assess the structural damage of the home.

Mike Ross of the Office of the Fire Marshal said it is still too early to say cause the explosion.

"We are still considering everything," said Ross.

He said the explosion likely originated somewhere in the basement.

Ross said they will be at the scene for at least two more days.

Extent of structural damage and cause of the explosion is yet to be determined.