A Canadian Tire employee in Hamilton says he was Tasered by police while suffering from an epileptic seizure earlier this week.

“I thought I was going to die,” Marcus Charles told CTV News Toronto.

Crescent-shaped bruises now run from his temples to his cheekbones and the imprint of handcuffs is still raw around his wrists.

On Sunday, Charles said he was working at Hamilton’s downtown Canadian Tire at Main Street and Victoria Avenue when he had an epileptic seizure.

He says he gets them once or twice every couple of months. The seizures that last six or seven hours, he says.

“I’ll wake up in the hospital with IVs asking what happened,” he said.

This time, Charles said when he snapped back to reality he was surrounded by four or five police officers. “I just started panicking,” he said.

Video footage of the incident was captured by a Canadian Tire colleague and obtained by CTV News Toronto. In it, Charles is seen lying on the sidewalk. His body appears to be convulsing as officers surround him and hold him down as he repeatedly shrieks.

“I cry every single time I watch the video,” Charles said.

Later, Charles said he found out he was Tasered by police and woke up at a local hospital, where barbed darts were removed from his body that were released from the taser.

Once he recovered, a police officer handed him a paper listing three charges: Assault Level 1 and two Assault Peace Officers charges. “They said I couldn't leave until I took it and signed it,” he said. 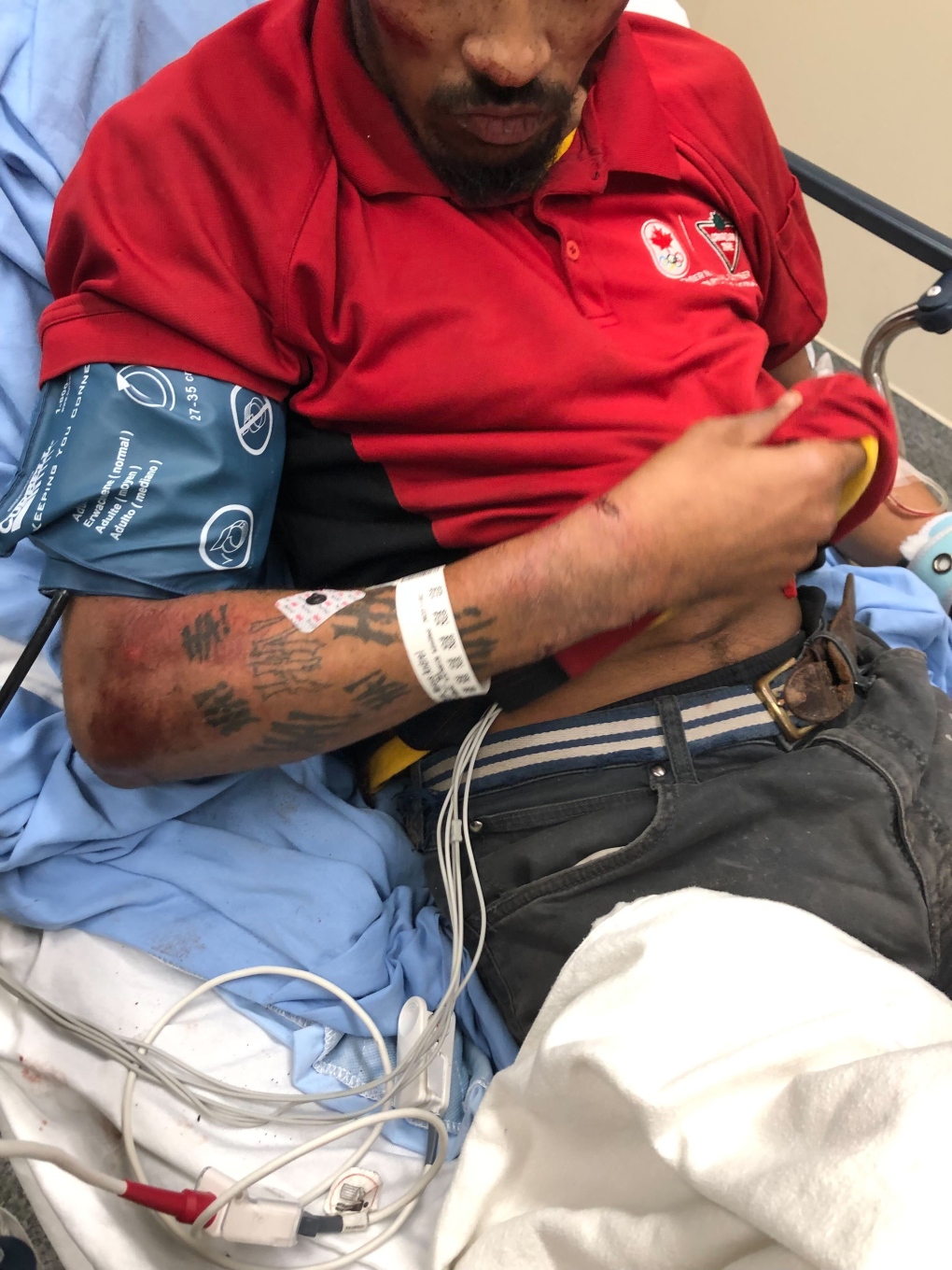 Marcus Charles can be seen above.

Hamilton Paramedic Service confirmed they received a medical assist call on Sunday, treated a male on-scene and transported him to a local hospital for treatment.

David Thompson, Hamilton paramedic and superintendent of media, quality and program development, originally told CTV News Toronto that he could not speak to the nature of the call. However, after further review, Thompson added that paramedics were involved in a “dangerous, violent and volatile” situation.

“The paramedics immediately extricated themselves from the situation to a safe location and requested assistance from the Hamilton Police Service as per policy,” he said.

Thompson said police officers immediately responded to the scene and assisted paramedics in bringing the “violent situation” under control.

“Violence or threats of violence against paramedics are never acceptable and will always result in police attendance to assist our paramedics,” he said.

In a statement obtained Tuesday afternoon, Hamilton police said they were called to a Canadian Tire to assist an ambulance with a combative patient.

"Upon arrival, officers were met with escalating behaviour that included physically assaulting two officers. We appreciate that the individual’s medical condition may have affected the events as they unfolded," police said in the statement. " Hamilton Police have obtained video that shows the entire incident and the officers’ actions were appropriate to the situation they faced."

"For the safety of the individual, officers and paramedics, officers deployed a Conductive Energy Weapon (CEW) in order to gain control of the situation."

Police said an officer suffered a concussion as a result of the interaction. They confirmed that three charges were laid in connection with the incident—three charges for assault on the two officers and one paramedic.

Charles, however, said the incident is making him question calling for help again.

“That was the scariest call for help in my life,” he said.

“We should know the difference between a person who has epilepsy and is confused and doesn't know what the situation is and if someone is being a threat, being combative.”

Eveyln Myrie, president of the Afro-Canadian Caribbean Association of Hamilton, said Charles’ partner called her for support after the incident took place.

“I’m really disturbed by the image and I think all decent people will find it disturbing, regardless of race or culture or background,” she said.

“I just think the police need to give us a good explanation. There are no explanations actually for this kind of behaviour.”

The men’s World Cup quarterfinal stage kicked off on Friday as Croatia eliminated Brazil and Argentina beat the Netherlands. CTVNews.ca has all the latest from the tournament.

France to make condoms free for anyone under 25, Macron says

France will make condoms free in pharmacies for anyone up to age 25 in the new year, President Emmanuel Macron announced Friday.