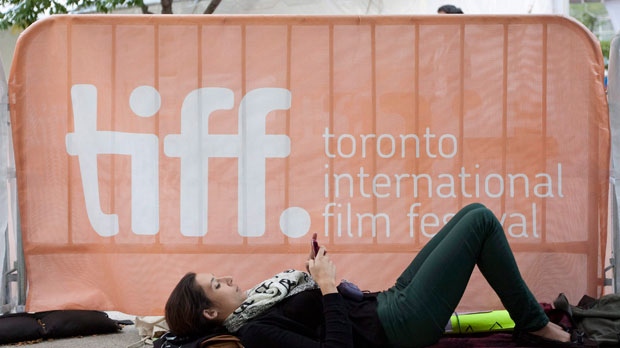 A woman waits behind a barricade prior to the gala for the film "Starbuck" during the Toronto International Film Festival in Toronto on Wednesday, Sept. 14, 2011. (The Canadian Press/Darren Calabrese)

TORONTO -- If there's one thing to take away from the Canadian lineup at this year's Toronto International Film Festival, it's that homegrown movie makers are pushing the creative boundaries, say programmers.

"Across the board, something we noticed right away is the ability of filmmakers to play with the form and for the esthetic choices of their films to truly speak of the subjects at hand," says Magali Simard, film programs manager at TIFF, which runs Sept. 8 to 18.

"It's impressive to see filmmakers do really bold moves."

Simard points to Xavier Dolan's "It's Only the End of the World," which won the prestigious Grand Prix award at the Cannes Film Festival in May. Vincent Cassel and Marion Cotillard star in the story of a dying author, which was shot on actual film (a rarity in cinema these days) and mostly in tight closeups in Quebec.

"It's about the emotions and we're tight with them. We never leave these characters, ever," she says. "You have to kind of take breaths between sequences sometimes because you're so involved in it. It becomes immersive in its narrative in that sense."

Meanwhile, fellow Quebec filmmaker Kim Nguyen (whose 2012 drama "Rebelle" was nominated for an Oscar for best foreign language film) gets metaphorical with "Two Lovers and a Bear." Gordon Pinsent voices the titular polar bear as it haunts a troubled couple, played by Dane DeHaan and Tatiana Maslany.

With "Anatomy of Violence," veteran filmmaker Deepa Mehta took what TIFF calls "a fearless approach" to the story of a 2012 gang rape and murder of a woman on a bus in India.

Using just a tiny camera, she worked improvisationally with actors in New Delhi to create fictional backstories of the victim and the six men who raped her.

"She's a great director and has been Oscar-nominated, but I think this is really one of her most courageous films," says Gravestock.

"It really looks at how the men were formed, their attitudes about where they came from, and it's shot in this really raw way. It's really one of the strongest films we saw this year."

Bruce McDonald returns to the black-and-white format with the coming-of-age tale "Weirdos," about a high-school relationship in 1976 Nova Scotia.

And for "Window Horses," Ann Marie Fleming used animation to tell the story of a young Canadian poet who learns about her family history during a literary festival in Iran. Sandra Oh, Ellen Page and Don McKellar are among the voice actors.

"It's quite stunning to look at and I think it's our first animated feature in more than 10 years," says Gravestock. "So it's really good to have that type of film back and at a feature-length level, so I'm very excited about showing that."

Other notable docs include "The Skyjacker's Tale" by Jamie Kastner, about a notorious 1970s murder trial in the Virgin Islands, and "The River of My Dreams: A Portrait of Gordon Pinsent" by Oscar winner Brigitte Berman.

Quebec is well represented in a couple of titles (besides those of Dolan and Nguyen): Anne Emond's "Nelly" is about a woman who wrote a scandalous novel based on her experiences as a sex worker. And in Chloe Robichaud's political satire "Boundaries," a foreign company eyes the natural resources of a fictional Canadian island.

Simard notes it's one of their strongest Canadian lineups for women "in many years," a trend that simply occurred organically.

"To have that happen to us in a natural way is comforting," she says.

"Obviously women are able to make films in Canada. That's something we should definitely all be proud of."