TORONTO -- Non-essential businesses closed due to the COVID-19 pandemic are being targeted in a series of break-and-enters in Toronto.

The Federal, a restaurant near Dundas St. W. And Dufferin St., had its front door smashed in early Monday morning. The owner says the thief broke in and stole a laptop and cash, and estimates the incident will set him back about $6,000 during an already uncertain time.

"There’s no guarantee that we're going to be able to make it through this," Zach Slootsky, the owner of The Federal, told CTV News Toronto. He fears the restaurant, which was opened eight years ago, will not be able to survive much longer.

"While we're waiting here in limbo, we're exposed and we just have this criminal liability that criminals are exploiting now.”

Fashion house Horse Atelier, near Queen St. W. And Bathurst Ave. was targeted last week. Co-founder Heidi Sopinka said the burglar deactivated their alarm system and stole about $3,000 worth of clothing. They also ransacked the store, destroying clothing and damaging the property.

"As you can see it's a perfect storm," Sopinka said. "All the stores are closed and empty and everyone's at home. And the prison system is at capacity, and the judicial system is shut down."

She worries as businesses sit vacant during the mandated closure of non-essential services they are an easy target for criminals. Horses Atelier has now added security cameras to act as a deterrent for future break-ins.

Other businesses have been boarded up as a preventative measure, and some restaurants have posted signs indicating there is no cash or alcohol kept on the premises.

Toronto police say they have seen the number of commercial and residential break and enters "fluctuate" over the past few weeks, but don't have hard data to share. 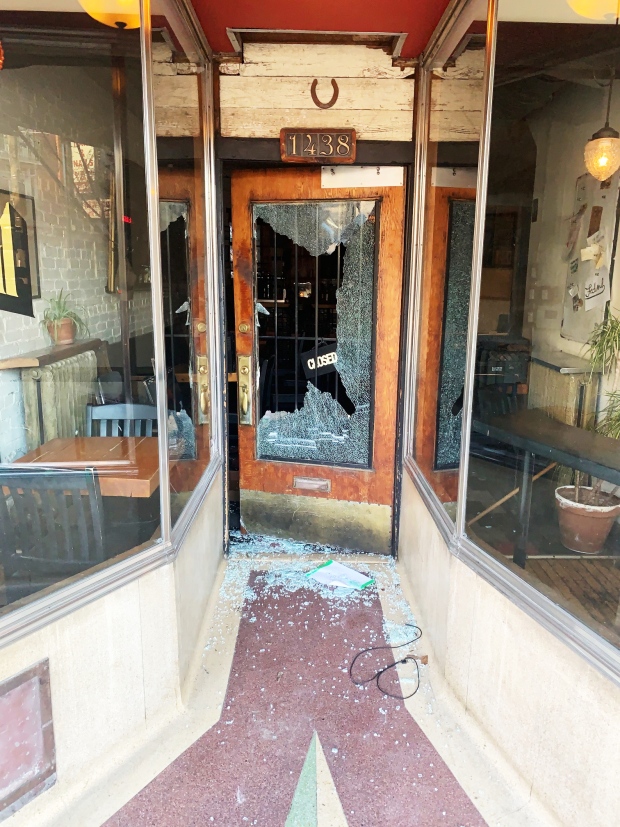 Gray said police have introduced targeted patrols in areas that may be more susceptible to crime.

"That's being led at the division using intelligence led data to determine any possible hotspots to make sure that as police officers do their regular patrols day to day, that they're visiting those areas,” Gray said.

Independent business owners, who have been seeing little to no income for weeks, say break-ins are a devastating blow during desperate times.

"If we're exploiting each other's weaknesses right now when we're all weak, we're not going to make it through this," Slootsky said.

Business owners can refer to the Crime Prevention Through Environmental Design (CPTED) for advice on how to protect their business property, and be a less appealing target.