TORONTO -- A Brampton man is $70 million richer after winning a record-breaking Lotto Max lottery jackpot in the Greater Toronto Area.

The cheque, which is the biggest lottery prize in Canadian history, was presented to the 49-year-old credit risk manager on Monday at the OLG Prize Centre in Toronto.

Lewis said he scanned his ticket using the lottery’s app, but at first he received an error message.

“I was shocked and wanted to confirm what I saw so I went online to see the winning numbers and one by one they matched!”

Despite the news, he said that he went to work that day, and thought of how to share the news with his wife. 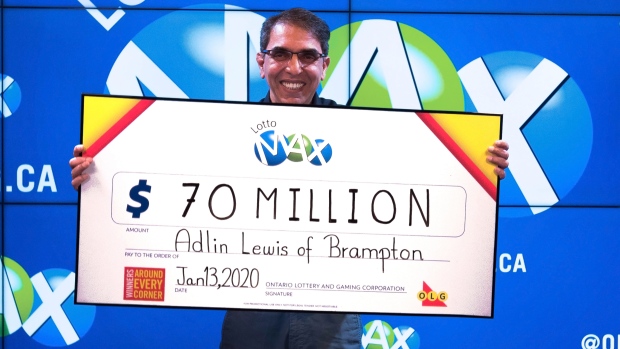 “I wanted to tell her in a special way – with a trip or something creative – but I couldn’t keep this news to myself,” he said, “I ended up waking her up in the wee hours of the morning on Thursday and just telling her outright.”

Lewis said that he’s been on a winning streak. A couple of years ago, he won a car, and more recently, he won first and second place prizes in a workplace holiday draw.

“When my colleagues found out that the winning $70 million … ticket was sold in Brampton, they were joking at the office ‘Is Adlin here? Did Adlin call in sick today?’” he said.

Lewis said he has played the lottery for over 20 years and often buys an extra ticket or two when the jackpot is high.

He said that with the money, he’s planning on making some investments, taking a few trips, and “enjoying life.”

“My wife has always wanted to try those VIP $100 slots in Las Vegas and now I can make that dream come true for her,” he said.

The winning ticket was purchased at George’s Convenience on Mississauga Road in Brampton.

The OLG says that since Lotto Max's launch in 2009, Ontario players have won over $5 billion. Lotto Max draws happen twice a week on Tuesdays and Fridays.

The next Lotto Max jackpot is an estimated $40 million, the OLG says.