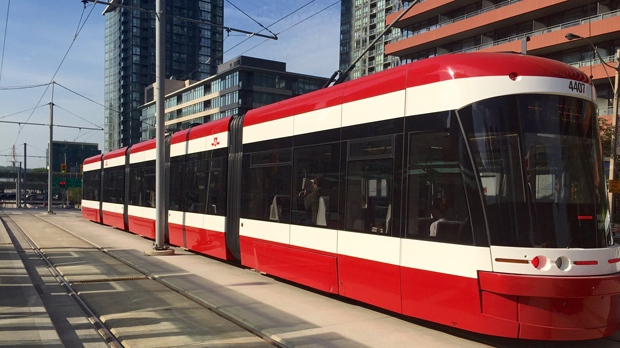 There’s been another delay by Bombardier in getting Toronto the new streetcars it was promised.

The Quebec transportation firm reneged once again on the number of streetcars it would deliver by the end of 2016.

Bombardier is now saying Toronto can only expect 13 more streetcars by the end of the year to bring its existing fleet to 30 vehicles.

That’s a far cry from the 75 the company promised back in 2015. In January 2016, the company said it would only be able to deliver 54 streetcars by the end of 2016 before changing their mind again in March to promise four new streetcars a month starting in April.

Despite facing a lawsuit by the city for the lack of progress it has made on its contract, the company says these latest delays are part of a turnaround plan that will eventually increase streetcar production.

“Bombardier acknowledges the disappointment of the TTC with regards to delivery of this project so far, but is still committed as ever to support its customer in the full delivery of this order,” said Bombardier Transportation Americas President Benoit Brossoit in the news release.

The revised delivery dates are in part due to a series of labour and parts issues at Bombardier’s plants over the last two years. Furthermore, some of the vehicles delivered to the TTC were returned after TTC inspectors concluded they did not meet manufacturing standards.

In order to boost production, Brossoit said Bombardier will commission its plant in La Pocatière, Quebec. The plant in Quebec produces streetcar parts which are then sent to a plant in Thunder Bay, Ontario where they are assembled.

Brossoit said the change will help the firm fulfill its full order of 204 vehicles by the end of 2019.

But Toronto Mayor John Tory told reporters on Monday that the latest delay is “no way to do business.”

“What more can we do, we’re the customer here that signed a contract, we’re paying on time, we’re doing everything we’re supposed to be doing,” Tory said.

Tory reiterated that though the situation is frustrating, there is no point in terminating the contract.

“At the end of the day you have to ask yourself, what do you achieve by terminating the contract? You get endless litigation, secondly you start all over again. Not as though someone else can just pick up streetcars tomorrow morning, they have all the designs and moulds and engineers who understand this so you're in a very difficult position in terms of making a decision like that. Ordinarily you'd say let's switch suppliers but it's not that simple,” he said.

The TTC filed a $51 million claim in liquidated damages regarding the delay.

The money from the claim will be used to keep the existing streetcars in service beyond their expected service life.

Andy Byford, the TTC CEO, said when he was told of the reduced delivery schedule, he insisted Bombardier “take ownership” of the delays.

“I don’t care how they do it, I want more streetcars,” said Byford.

The new fleet currently in the TTC’s possession has been dispatched on the Spadina and Harbourfront routes.

With files from Chris Herhalt.