Nine-year-old Jack Blunt had no idea that inside his school library he would meet two of his heroes: Toronto Blue Jays players Ryan Goins and Kevin Pillar.

But there they were on Monday, carrying gifts such as hats and shirts, and four tickets to the Jays’ first post-season game on Thursday.

“I was surprised that they came to our school,” Jack told CTV News.

But Goins and Pillar weren’t just there to visit the school -- they were there for Jack.

“How did they even know about me?” Jack said. 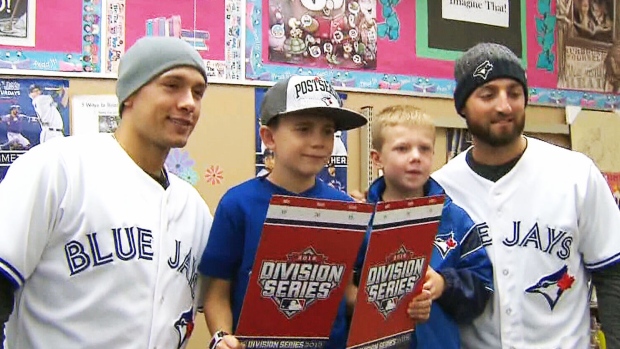 Jack was nominated by a teacher to meet the two athletes because he’s a huge baseball fan, and he’s been through lot. When Jack was in kindergarten, he and his brother Wyatt lost their father to complications caused by cancer, and last year, Jack was diagnosed with diabetes.

“I think, like any child, there are good days and bad days, but on the whole, he’s really just trooping along,” said Jack’s principal, Mary Gyemi-Schulze.

For Goins and Pillar, it was a special off-the-field opportunity.

“That was awesome,” Goins said after meeting Jack. “I think he was kind of in shock, but I was probably as nervous to give him the tickets as he was to see us here at his school.”

Jack was so surprised when he saw the players, he was speechless.

“Sometimes you’re just so excited you’re at a loss for words,” said Pillar. “I’d imagine that’s what he’s feeling. He’ll go home tonight and once it sinks in, it’ll be pretty special for him.”

Besides being a big Jays fan, Jack also runs cross-country and wants to be actor.

But on Monday, he was a celebrity.

“I’m going to be the most popular kid in the entire world,” he said.

With a report from Scott Lightfoot