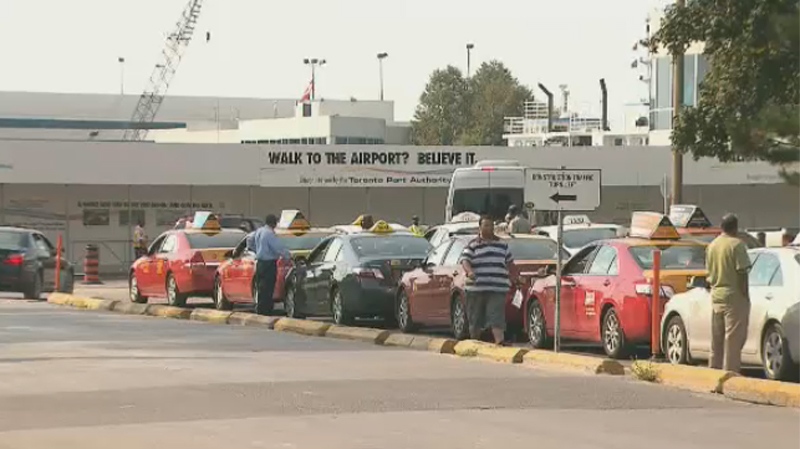 Taxi drivers line up outside the Billy Bishop Airport in Toronto on Tuesday, July 31, 2012.

The Toronto Port Authority, which operates the terminal, had banned drivers after accusing them of making a mess in the passenger bathrooms.

The TPA issued a warning to cab drivers on July 16, warning that “urinating and defecating on the floor, walls, hand driers etc. is not acceptable and will result in all taxi drivers being refused access to the building.”

The taxi drivers were later denied entry to the bathrooms after they “refused to comply” with the earlier request, according to a memo.

The ban came to light on Tuesday, after cab drivers complained about being unfairly accused of making the mess.

The bathrooms in question are inside a building at the end of Bathurst Street, on the shore across from Toronto’s Billy Bishop Airport. The area is frequented by taxi drivers picking up and dropping off fares at the terminal.

By Tuesday afternoon, the TPA announced that the ban would be lifted and drivers would be free to use the facilities once repairs were completed on the bathrooms next week.

The TPA said Tuesday that it met with the iTaxi Workers Association and “plans to reopen the existing washroom facility within our Passenger Transfer Facility and work with members of the taxi industry who have committed to monitor the washrooms and help oversee the facilities.”

Two portable toilets placed near the building will remain available for drivers until the bathrooms reopen next week.

The port authority has plans to include separate washrooms for taxi drivers in a new corral that is being constructed at the site.

Kristine Hubbard, operations manager at Beck Taxi, said earlier in the day that she had hoped a better solution would be found.

“There are 10,000 very professional drivers in this city, I don’t know a ban is the best answer,” Hubbard told CTV Toronto.

“The hope would be that dialogue would be started. We would always want to work together. If there was some concern, if something was going on that we needed to address, or if there were a few individuals who had not been respectful of those facilities, we would want to deal with that.

“But to decide that all drivers are not only the ones doing this, but that they are all doing it, I think we can come up with something better.”

Earlier on Tuesday, taxi driver Wally Sanad accused the TPA of blaming drivers for the mess without any proof that they were responsible.

“It is kind of insulting for us.”