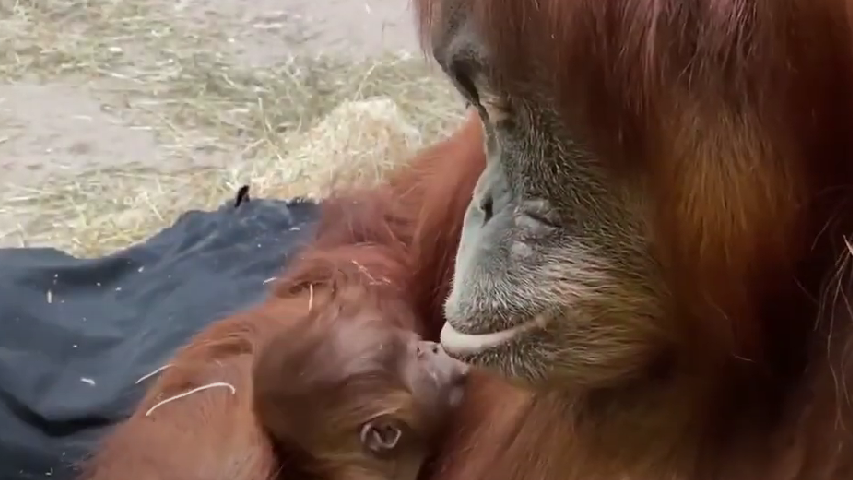 The Toronto Zoo has released video of a baby orangutan born on April 8, 2022.

The Toronto Zoo has announced the birth of a critically endangered Sumatran orangutan.

The baby boy was born around 3 p.m. on April 8, zoo officials said in a news release issued Monday morning. Both the 29-year-old mother, whose name is Sekali, and child appear to be healthy.

“Sekali’s maternal instincts kicked in right away: she immediately held the baby against her body, cleaned it, and showed concern whenever it vocalized. She even carefully repositioned the umbilical cord when shifting positions,” officials said.

Video released by the zoo shows Sekali doing just that—cleaning the newly born, furry bundle of joy and feeding him.

The zoo says that Sekali’s pregnancy was a typical length for an orangutan—about 243 days, or about a month shorter than that of a human.

This is Sekali’s second child but the first with Budi, a 16-year-old male orangutan who she was paired with at the recommendation of the Association of Zoos and the Aquariums Orangutan Species Survival Plan.

The Toronto Zoo houses the only Sumatran orangutans in Canada. In 2017, the animal was recently upgraded from endangered to critically endangered by the International Union for Conservation and Nature.

“We are incredibly excited to welcome this new addition to the Toronto Zoo family,” Dolf DeJong, CEO of the Toronto Zoo, said in a statement. “This orangutan baby is an important contribution to a genetically healthy Sumatran orangutan population in human care.”

“Meanwhile, Sumatran orangutans are under increasing pressure in the wild due to habitat loss and the palm oil crisis, which we are working with partners to address. We are proud to play an important role in the conservation of this amazing species.”

There are fewer than 15,000 Sumatran orangutans in the wild and about 95 per cent of them live in the Greater Leuser Ecosystem in Sumatra.

Thirteen orangutans have been raised at the Toronto Zoo since 1974.

Nike has suspended its partnership with and paused support for Hockey Canada as the sports organization faces increasing pressure to handle alleged sexual assaults.

The Toronto Blue Jays take on the Seattle Mariners Friday in Game 1 of the AL wild-card series at Rogers Centre this weekend. CTVNewsToronto.ca will have live updates throughout the game.

Health Canada says some manufacturers of kids' pain and fever medications are now operating "at double or triple their normal volumes" in an effort to address a months-long shortage.

What are BA.2.75 and BQ 1.1? The two emerging COVID-19 subvariants raising concern among infectious disease experts

Two new subvariants of the Omicron strain of COVID-19 identified in recent months could fuel increased cases and hospitalizations in Canada through the fall and winter, infectious disease experts say.

Shorts or a jacket (and umbrella)? Thanksgiving forecast varies across the country

Thanksgiving weekend weather is shaping up to be drastically different depending on where in the country you live.