TORONTO -- About 200 people stopped traffic at Rainbow International Bridge in Niagara Falls, Ont. on Sunday afternoon in protest of what they call an “invasion of the Wet’suwet’en Nation” due to the proposed pipeline in British Columbia.

The demonstration started around 2 p.m. near Highway 420 and Stanley Avenue, at which point the protesters marched towards the entrance to the bridge, effectively blocking traffic from travelling into the United States.

Protesters held signs that said “what about the next generation,” “reconciliation is dead” and “stand with Wet’suwet’en.”

Speaking with CTV News Toronto, an event organizer said that while the Wet’suwet’en protests began as an environmental issue, “it goes above and beyond that.”

Vanderklis said that they chose to block the U.S.-Canada border crossing because the government has blocked access to their borders.

The demonstration was organized in four days, Vanderklis said, in response to reports that the Royal Canadian Mounted Police (RCMP) was blocking reporters from Wet’suwet’en camps in B.C., preventing them from getting first-hand accounts.

The second issue is self-determination, Vanderklis added, saying that the band council system was thrust upon Indigenous People.

“Get back to the table and properly negotiate with Wet’suwet’en people,” he said. “We want the freedom to choose.” 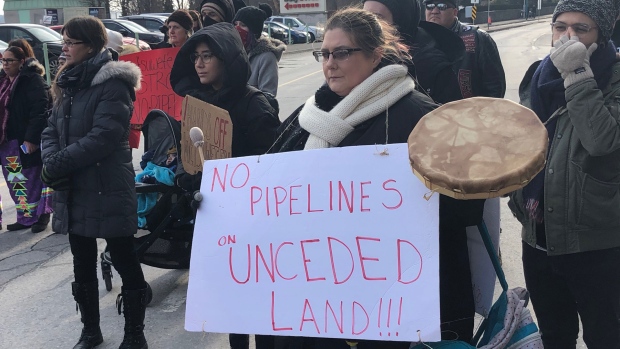 Sunday’s protest comes a day after hundreds of people blocked westbound and northbound trains from travelling through Macmillan Yard in Vaughan.

The group, who said they were conducting the protest in solidarity with Wet’suwet’en hereditary chiefs, was served an injunction by Canadian National Railway police, but a spokesperson told CTV News Toronto the document was set on fire. 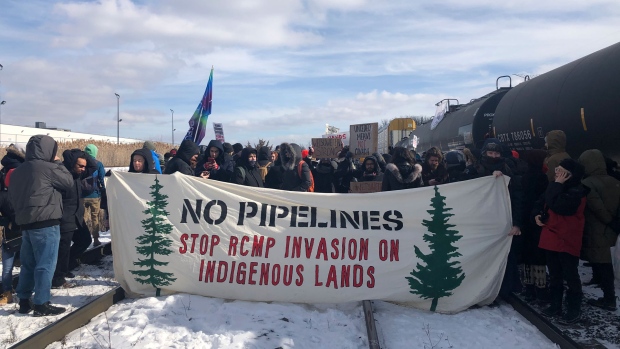 Demonstrations have erupted across the country after the Royal Canadian Mounted Police (RCMP) moved into the Wet’suwet’en territory and arrested pipeline protesters. A blockade near a rail line in Tyendinaga Mohawk territory, near Belleville, was erected more than a week ago.

The protest has caused significant disruptions for travellers using VIA Rail and CN rail has said they don’t feel it is safe to operate trains so close to the blockade.

The hereditary chiefs argue that band councils only have authority over reserve land.

Earlier in the day, Indigenous Services Minister Marc Miller said that there has been “modest progress” following discussions with representatives of the Mohawk First Nation on Saturday. He also said that he doesn’t believe sending in police to break up the Tyendinaga blockade will be effective.

"My advice to my colleagues is let's make sure we get to a peaceful solution. That involves dialogue,” he said.

Traffic coming into Canada from the United States is not impacted by the protest.