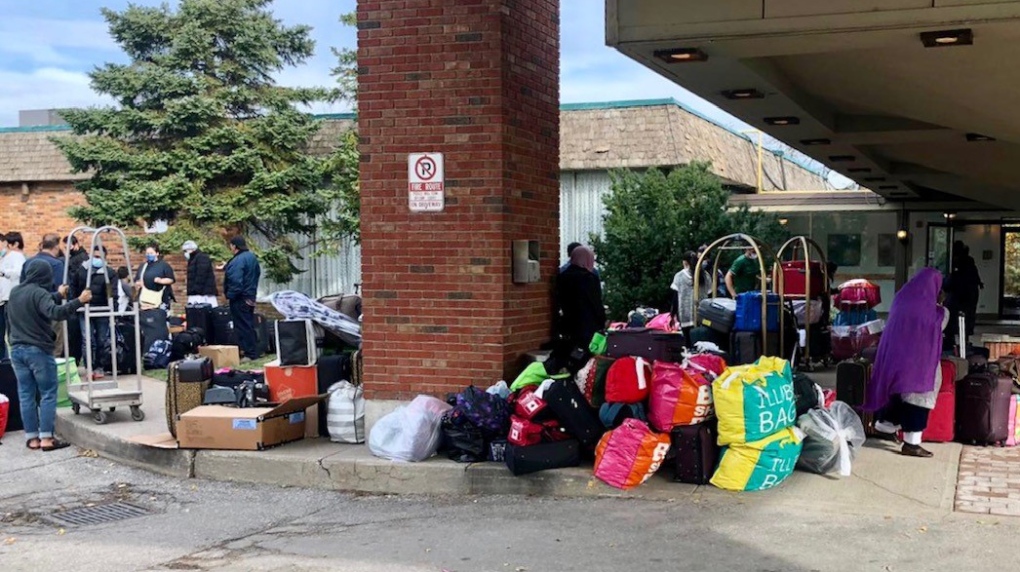 Afghan refugees are shown outside a Scarborough hotel in this undated handout image. They are among almost 400 Afghan refugees that are being moved on Thursday and Friday from a hotel in Richmond Hill, Ont. to another hotel in Scarborough area. THE CANADIAN PRESS/HO

TORONTO -- Sayed Enaiatullah Najafizada and his wife are frustrated.

The Afghan refugees are facing the prospect of being moved between hotels in the Greater Toronto Area for the fourth time since arriving in Canada this summer.

They're among nearly 400 Afghan refugees being shifted to new temporary lodgings on Thursday and Friday -- from a hotel in Richmond Hill, Ont., to one in Toronto's east end -- as they wait for their permanent residency applications to be processed ahead of a move to permanent housing.

Some refugees say the multiple moves are disrupting connections they're building in the local community and creating instability for children who have to change schools as a result of the relocations.

"Are we touring the hotels in Toronto or (do) they have a plan that we set out here," said Najafizada.

"Touring the hotels is not very pleasant. I know staying in the hotel is always good when you're traveling, but when it becomes home for you ... then you're frustrated, you're disappointed."

Najafizada, 32, said he and his wife were placed by a settlement agency in a hotel in Richmond Hill, north of Toronto, when they arrived in Canada on Aug. 27 following the Taliban's takeover of Afghanistan. The couple was moved to another hotel in Mississauga, Ont., in September before being brought back to the first hotel last month.

The settlement agency providing services for the refugees put signs on the walls of the Richmond Hill hotel on Monday notifying the refugees they were being moved this week, Najafizada said, noting that the signs didn't explain why the move was being made.

Adding to his frustration, Najafizada said, is the fact that he's been waiting nearly a month and a half for the federal government to process his family's application.

"I don't know what is the problem here," he said. "If the Canadian government is overwhelmed, if they cannot do it, then please do not bring people from outside."

Abdulrahman Rahman, another Afghan refugee, said the frequent change in locations is detrimental to the connections he's been building in the area.

He said his brother's two children, who started going to school in Richmond Hill, will now have to start afresh in east Toronto.

The executive director of COSTI, the settlement agency, said his organization was moving the refugees to another hotel because more space was needed for new arrivals expected soon.

Mario Calla said the current hotel is not fully reserved for Afghan refugees - other guests are also using the hotel - and his organization's services are usually more accessible when the whole hotel is booked for refugees.

"We will have the whole hotel, will have an additional 90 rooms to work with," he said of the latest move. "We can concentrate the services there."

"It's a concern, but they're not likely to be settling in that community," he said.

Calla said 332 Afghan refugees have been settled in permanent housing in Toronto area while 720 are temporarily living in hotels.

A spokesman for the federal immigration department said the government is taking feedback from refugees seriously.

"(The department) is applying lessons we've learned and feedback from refugees to improve the hotels," said Alexander Cohen. "As refugees move from the hotels to their final destinations and new people arrive, the services ... are continuously rebalanced to meet current needs."

Ottawa has committed to resettling 40,000 Afghan refugees, with nearly 9,500 people approved so far and 3,325 now in Canada.

This report by The Canadian Press was first published Nov. 11, 2021.