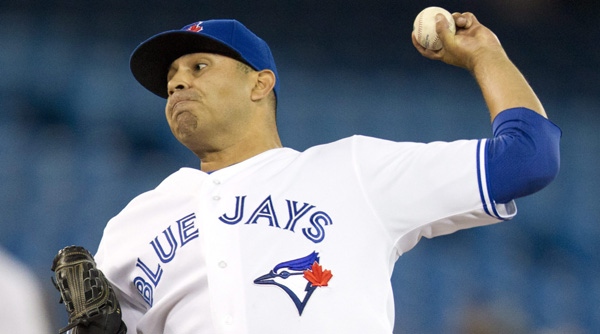 Jose Bautista hit a solo homer and drove in two runs while Brett Lawrie of Langley, B.C. also hit a homer leading off the eighth inning as the Blue Jays won their second game in a row in the opener of a three-game series.

Rays third baseman Evan Longoria, who has won two Gold Gloves, committed a career-high three errors in the game, including two on the first two batters of Toronto's three-run third.

The Rays (5-6) entered the game with three errors as a team in their first 10 games of the season. Longoria equalled the club record for errors in a game.

Ricky Romero (2-0) got the win after allowing three runs on eight hits, including a homer by Matt Joyce to lead off the seventh, in six innings to pick up his second consecutive win.

The Blue Jays (6-4) took the lead when Bautista hit his second homer of the season with two out in the first. His previous home run was opening day, April 5, in Cleveland and he entered Tuesday's game batting .206 (7-for-34) with two runs batted in.

Romero allowed base runners in each of the first innings but escaped by facing the minimum number of batters.

Longoria, usually a superb fielder, was charged with errors on consecutive batters in the third to set up the second run of the game.

Longoria erred on Jays catcher J.P. Arencibia's grounder to lead off the inning and then flubbed Yunel Escobar's grounder. Kelly Johnson forced Escobar at second to leave runners at the corners.

Bautista hit a sacrifice fly to left and Lind followed with his first homer of the season to put the Blue Jays into a 4-0 lead. Lind also singled in a run in the seventh inning.

The Rays cut the lead in half in the fifth. Joyce singled with one out, Sean Rodriguez walked and Reid Brignac singled home Joyce who slid home after hesitating rounding third.

Brignac took second on an error charged to Lawrie on a pickoff attempt by Arencibia. Chris Gimenez drove in the second run of the game with an infield single into the hole at shortstop.

Longoria's third error came in the sixth on Eric Thames' infield hit against reliever Brandon Gomes. It was a difficult throw to make as he charged the ball but it eluded Carlos Pena at first base. Bautista scored and Thames went to second on the error.

Joyce led off the seventh with a home run. Romero then followed that by walking Rodriguez, and Jays reliever Jason Frasor took over to finish the inning.