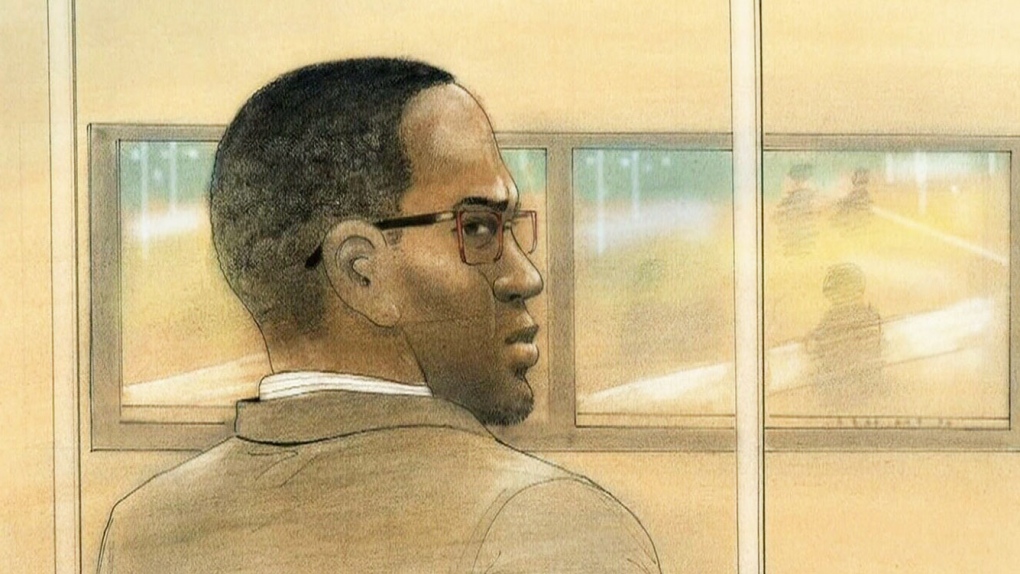 A forensic psychiatrist has conceded under cross-examination by the Crown that the man who shot up Toronto's Eaton Centre may have been motivated by revenge.

TORONTO -- The man accused of gunning down two people in a crowded mall might have faked a mental disorder to cover what was a cold-blooded revenge killing, court heard Tuesday.

Under cross-examination, a forensic psychiatrist conceded that Christopher Husbands might have known exactly what he was doing when he opened fire at the landmark Eaton Centre.

"It's a possibility," Dr. Julian Gojer testified. "The jury should definitely consider the issue of malingering."

Despite his lack of diagnostic certainty, Gojer said he nevertheless believes a mentally disordered Husbands, 25, acted like a "robotic automaton" after finding himself confronted by two men who had viciously beaten and stabbed him several months earlier.

The defence called Gojer as a witness in a rare attempt to have Husbands declared not criminally responsible due to post-traumatic stress disorder -- a rarely successful strategy.

"His actions were more instinctive and reflexive," Gojer testified.

Husbands has pleaded not guilty to first-degree murder despite admitting to fatally shooting Nixon Nirmalendran and Ahmed Hassan and wounding five others in June 2012. He has also pleaded not guilty to aggravated assault, criminal negligence causing bodily harm, and recklessly discharging a firearm.

Husbands has testified he was in the busy food court when he looked up and saw Nirmalendran point at him and say to his brother Nisan, "Shoot him!"

He said he didn't remember opening fire on the duo, testifying only that he heard a "loud bang."

Prosecutor Mary Humphrey, who suggested Husbands had been waiting for months for a chance to kill his tormentors, spent the day picking apart Gojer's evaluation.

In four sessions with the psychiatrist, she noted, the accused did remember firing the first shot but later claimed to have no such memory.

"Mr. Husbands said he reacted to what he saw on impulse, and he grabbed his gun and he fired a shot at Nisan. He does not recall what happened after that," Gojer wrote in his notes.

Humphrey also suggested Husbands himself had provoked the encounter with the unarmed men.

Nirmalendran and the others were simply walking by when Husbands, according to some witnesses, called out to them: "Whatup? or whatup, pussy?"

"He actually takes them by surprise," Humphrey said. "There's no imminent threat, because he's the one armed with a gun."

If Husbands were lying about hearing Nirmalendran tell his brother to shoot, the "whole house of cards falls down," she said.

"'If he lied, end of story," Gojer conceded.

Humphrey said evidence that Husbands had become paranoid after he was attacked could have been the result of his high-risk lifestyle as a drug dealer who breached bail and carried a gun.

Gojer defended his diagnosis, saying he believes the accused was suffering from PTSD when the confrontation occurred.

"Or it's conveniently made up," Humphrey countered.

Superior Court Justice Eugene Ewaschuk outlined the defence of not criminally responsible for the jurors.

It comes down to whether the accused was suffering from a mental disorder and didn't know what he was doing was wrong, the judge said.

"The burden in this case is on the accused to prove insanity," Ewaschuk said.

A not criminally responsible verdict doesn't mean Husbands, who quietly took notes in the prisoner's box, would walk out a free man.

"He goes into a hospital behind locked doors," Gojer said.

The Crown is expected to call its own psychiatrist after Gojer wraps up his testimony on Wednesday.