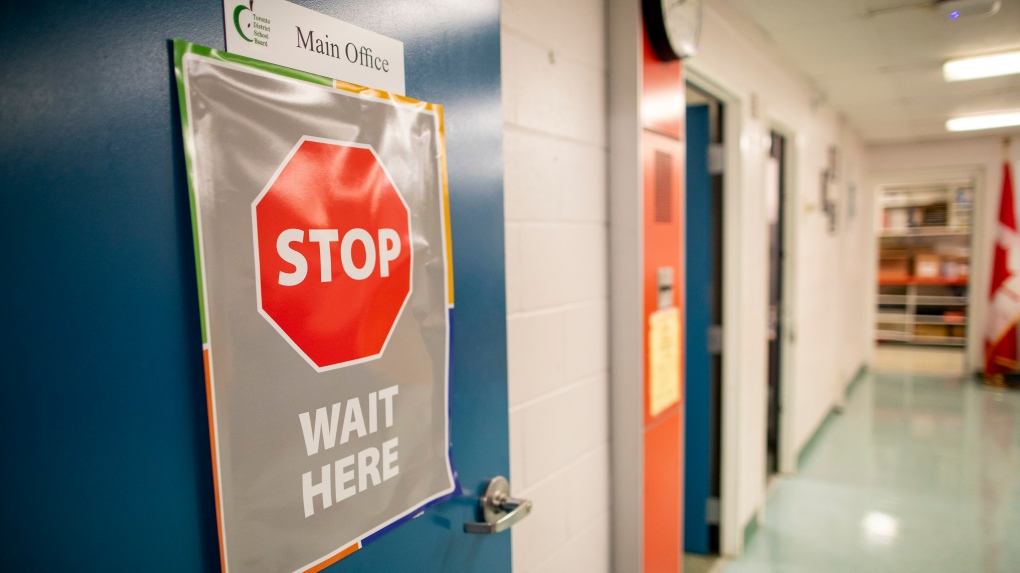 A sign outside the main office is seen at Kensington Community School amidst the COVID-19 pandemic on Tuesday, September 1, 2020. THE CANADIAN PRESS/Carlos Osorio
TORONTO -

Nearly two per cent of all fulltime and occasional staff members at the Toronto District School Board (TDSB) have been placed on a leave of absence without pay after refusing to disclose their COVID-19 vaccination status.

As of 5 p.m., on Nov. 2, 100 permanent staff and 643 occasional staff did not submit their mandatory vaccine attestation and, as a result, have been placed on a non-disciplinary administrative leave of absence without pay, the TDSB said.

The TDSB noted that the vast majority of occasional staff who did not submit their status did not work in the TDSB during the 2021-22 school year.

The mandatory vaccination policy applies to all school board employees and volunteers, including occasional teachers and casual education workers, school board trustees and student transportation drivers.

Of the permanent staff who refused to submit their vaccination status, 13 are elementary teachers and three are secondary teachers, according to a tweet from TDSB Trustee Shelley Laskin.

Only 77 of the 195 occasional and casual elementary teachers who didn’t complete their attestation worked this school year.

Meanwhile, 28 of the 121 occasional secondary teachers who didn’t submit their status worked this year, and of the 327 support staff who didn’t complete the attestation, only 154 worked this school year.

The TDSB has a total of 41,485 staff members, including employees who are permanent, occasional and on-leave.

Over two per cent of TDSB employees have requested a religious or medical exemption.

Last week, the TDSB said it was extending its Nov. 2 vaccination deadline by nearly three weeks for some workers due to longer than anticipated time to review a significant number of exemptions.

Staff have until Nov. 19 to get their first dose, and until Dec. 19 to receive their second and be considered fully vaccinated.

Anyone who applied for a medical exemption and is denied will have 45 days from when they were denied to get a vaccine dose, and will have to get tested bi-weekly during that time.

If employees don’t receive a dose by Nov. 21 they will be placed on unpaid leave.

Biden says 'we have to act' after Texas school shooting