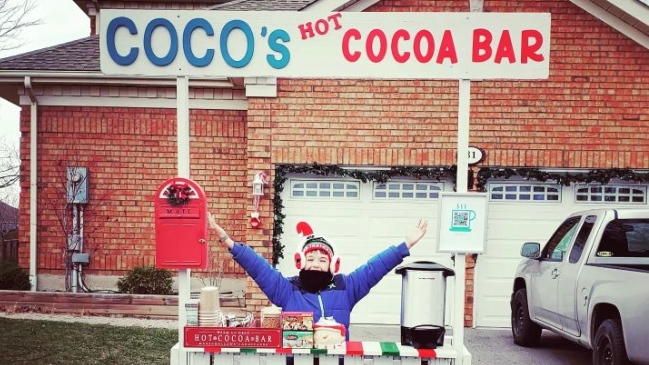 Cohen Lane and his cocoa stand are seen in this undated photograph provided by family.

A 10-year-old boy from Ontario is spending his winter weekends brewing batches of hot chocolate for a good cause.

For years Cohen Lane has wanted to do a fundraiser for Toronto’s Hospital For Sick Children—but he wasn’t sure what to do. That is until, while shopping for Christmas decorations, the family came across the makings for a lawn stand.

“He was like, ‘Oh, can you do a cocoa stand for me so I can raise money?’” his mother, Karina Oliveira, told CTV News Toronto. “And then we just started kind of building it up.”

Cohen then went to work, designing both the stand—complete with a topping bar and alternative tea options—as well as a QR code so those without cash can still make donations. They even have a water heater as well as a seating area where people can enjoy their beverage of choice.

“It’s been very busy, but it's been really fun,” the 10 year old said. “Everyone said that it was really good chocolate.” 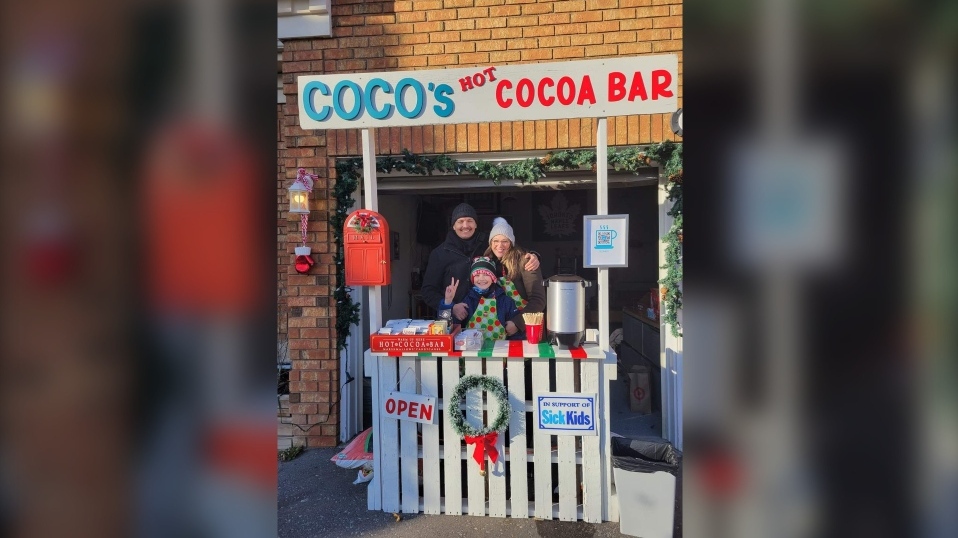 The family has a strong connection to SickKids Hospital. Oliveira said her nephew—Cohen’s cousin—was taken there when he was just three months old, after experiencing a Tracheal collapse.

“Within I’d say two days, you can see he totally turned around,” she said. “We’ve had other family members who've had to go to SickKids, like actually recently last month, my young cousin, he also had to go in.”

Cohen added that he hopes to help raise money so that the hospital has more funds to support their patients, especially during a time of year where they are operating at overcapacity. Earlier this month, SickKids had to put some surgical procedures on hold to preserve critical care capacity.

“The other reason why I did the SickKids this Christmas is because there's a lot of things going on at SickKids,” the boy said. “It's really full.”

Cohen started with a goal of raising $350 for the hospital, but after the first weekend the family had collected about $1,200 in donations—selling about 100 cups of hot chocolate on a pay-what-you-can scale and accepting even more in electronic transfers.

They plan to be on their front lawn in Whitby, Ont. every Saturday and Sunday between 2 p.m. and 4 p.m. until Dec. 31 to continue to raise money. The family is even expanding their operations, having spent some time this week at Bulk Barn hand picking a bunch of new hot chocolate toppings, as well as holiday-themed teas for those who may not have much of a sweet tooth.

“My most favorite thing since I'm English, that’s one of my backgrounds, is tea but I love hot chocolate. I love me some hot chocolate,” Cohen said.

“It's just a festive thing on holidays everyone likes.”

Cohen has multiple different types of hot chocolate at his cocoa bar, including S’mores, Rollo and Turtles. A company called “Deadly Grounds” also donated a dozen two-pound bags of original hot chocolate to the family for their fundraiser.

“That's a lot of hot chocolate,” he said.

Cohen has done a lot of advertising at his school and on social media—and hopes that people continue to come out to the cocoa bar. The family has set up a donation page through SickKids Hospital so that people know where their money is going. On the page, it says the money will be used to build a new state-of-the-art hospital, continue the hospital’s research and build partnerships around the world.

Cohen credits his early fundraising success to his neighbours and friends who are helping get the word out. He has since raised his goal to $5,000—although he jokingly hopes to make $10,000.

“We are also going to do this every year,” Cohen added.

Former Wagner commander says he is sorry for fighting in Ukraine

A former commander of Russia's Wagner mercenary group who fled to Norway told Reuters he wanted to apologize for fighting in Ukraine and was speaking out to bring the perpetrators of crimes to justice.

Justice Minister David Lametti says he will "look at" a federal policy that restricts gay and bisexual men from donating to sperm banks in Canada, after CTV News exclusively reported on Wednesday that a gay man is taking the federal government to court over it.