Youth diagnosed with vaping-related illness in London, Ont. is believed to be first in Canada

Health authorities in London, Ont. say a high-school aged person was put on life support after being diagnosed with a severe respiratory illness related to vaping.

The case was reported Wednesday by the Middlesex-London Health Unit, the same day the province promised that it will begin tracking the health effects of vaping.

The youth was reported to have no other health issues, but used e-cigarettes at least daily, Dr. Christopher Mackie, the medical officer of health at the Middlesex-London Health Unit, said. After being put on life support in the intensive care unit, the youth recovered and is now at home, he said.

"There was no other cause ... the only issue that was identified was that the individual vaped e-cigarettes,” the doctor said at a news conference Wednesday. "As far as we are aware, this is the first case vaping-related illness that's been reported in Canada."

Minister of Health Christine Elliott issued an order requiring public hospitals in Ontario to provide the medical officer of health with statistical information related to incidents of vaping-related pulmonary disease.

"In light of the growing evidence, I have become increasingly concerned about the prevalence and possible health consequences of vaping, particularly as they affect our youth,” Elliot wrote in a news release Wednesday.

“It has become abundantly clear that we do not have access to sufficient data and information to understand the potential scope of this issue.”

Mackie said up until now, there hasn't been any system of reporting vaping-related illnesses in Canada.

"That's why the move in Ontario to gather more systematic information is a really important move because it can answer all sorts of questions," he said. "This will help pull the covers back, and we will be able to see in a much more detailed way what is happening with vaping." 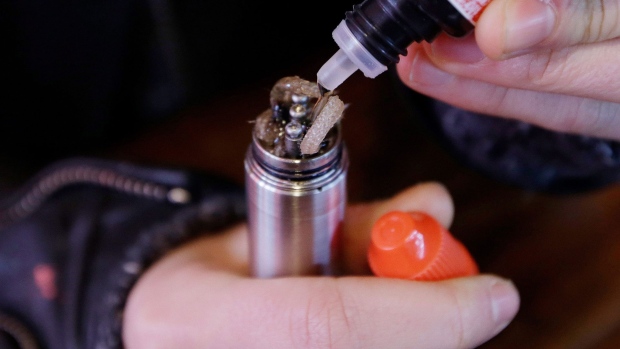 In this Feb. 20, 2014 file photo, a liquid nicotine solution is poured into a vaping device at a store in New York. (AP Photo/Frank Franklin II)

A seventh person died this week from vaping-related causes in the U.S., which prompted investigations across the country into the outbreak of lung injuries and diseases associated with the act.

"There have certainly been some who claim that this is a jurisdictionally bound issue... that people vaping in Canada were not at risk," Mackie said. "That is not the case.”

“It's important that people understand that vaping does create great health risks here in Canada as well."

Looking at the international evidence, he said, the health concern isn’t related to just one brand of e-cigarettes.

The use of vaping among Canadian teens skyrocketed by 74 per cent in a single year after the federal government legalized its use in May 2018, according to research by the University of Waterloo.

Health Canada launched a campaign, earlier this year, to warn youth about the lack of information and research relating to the use of vaping devices.

The province's new sex-education curriculum now mentions the effects of vaping starting in Grade 4. It was not mentioned in the previous curriculum.

Elliot said the information collected will be “crucial” in creating evidence-based solutions for the issue.