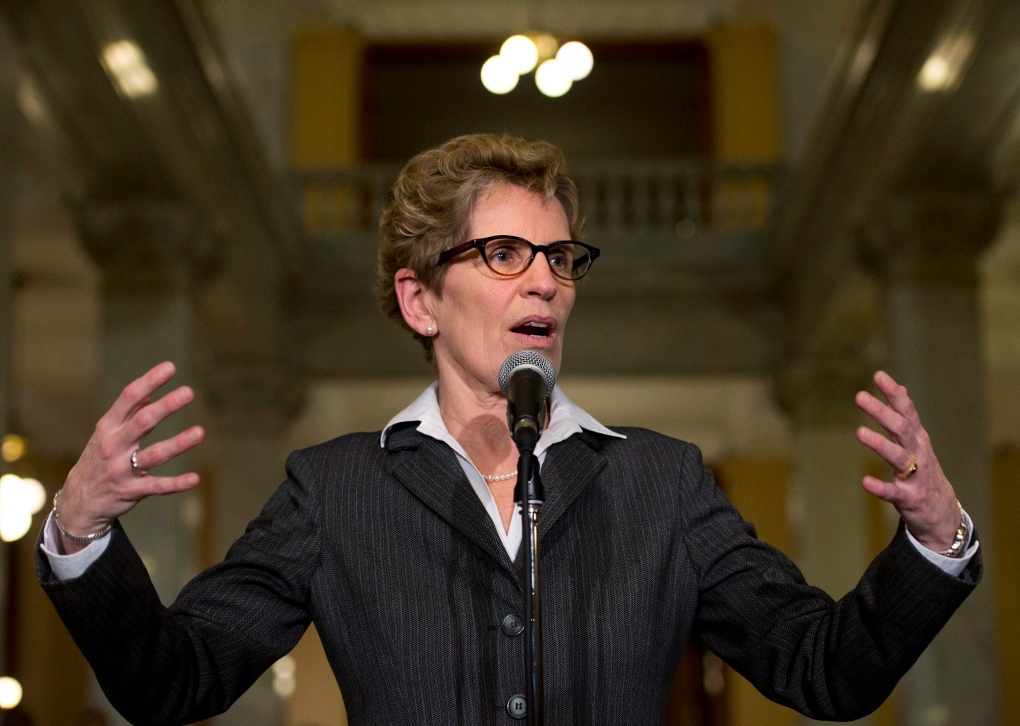 Most of the Liberal caucus supported her rivals for the Liberal leadership, including about two dozen who backed former Windsor West MPP Sandra Pupatello, but that's all behind them now, insisted Wynne just before getting a standing ovation at her first caucus meeting as leader.

"For me there are no hard feelings because somebody worked on another campaign team," she said.

"One of the reasons I wanted to have a caucus meeting as quickly as possible (was) because I don't think we should allow any potential rifts to widen."

Wynne declined to say if she would agree to a demand from NDP Leader Andrea Horwath for a public inquiry into the decision to cancel two gas plants at a cost of at least $230 million, but hinted it's not a priority for a government facing an $11.9 billion deficit.

"But I think we need to be very careful that we don't spend public dollars in a way that's not effective."

The New Democrats say if there is no public inquiry into the Liberals' politically-motivated decisions to cancel the gas-fired power plants in Oakville and Mississauga, then the legislature will become seized with the issue again -- as it was last fall when Premier Dalton McGuinty prorogued the legislature hours before public hearings into the gas plants were to begin.

"We all know what's going to happen: the House is going to come back, there'll be a throne speech, and as soon as possible the Conservatives are going to move a motion to deal with what the House didn't deal with because of prorogation, and rightfully so," said NDP house leader Gilles Bisson.

"It would be smart to take it out of the legislature so you can depoliticize it, allow an inquiry to happen by a third party who is not a political operative."

Wynne also said she is trying to work behind the scenes on finding ways to work with Progressive Conservative Leader Tim Hudak to help keep the minority government alive instead of being forced into a general election, and the two have already had one good phone chat.

"We agreed that we would have further conversations and that our staff would be speaking," said Wynne.

"In terms of content and the specifics, what we agreed was that we need to be able to build some trust and have some conversations in confidence, but that we would let everyone know that we were meeting."

Repeating her commitment to bring back the legislature on Feb. 19, Wynne declined to say who would be in her cabinet, but agreed she would keep her commitment to appoint herself as minister of agriculture and food for up to one year -- although it may not be this year.

"We haven't specified the period of time, but I have said that I want to shine a light on that issue because I think it's one of great concern to the government," she said.

Leadership rival Glen Murray, who actually dropped out of the race before last weekend's convention to support Wynne, said he hadn't been offered a specific cabinet post, and dismissed suggestions he could become education minister.

"I thought you liked me," Murray joked when reporters asked if he'd go to education.

It's widely expected Wynne will have to replace Education Minister Laurel Broten if she hopes to repair relations with teachers, who are angry at the Liberal government for imposing contracts on them, and who protested by the thousands outside the leadership convention.

Former banker Charles Sousa, whose decision to withdraw from the leadership contest after the second ballot and go to Wynne helped put her over the top, wouldn't comment on speculation he'll become finance minister.

"I made no deals," Sousa told reporters Tuesday.

Finance Minister Dwight Duncan denied reports he's already accepted a private sector job, but said he will have more to say about his future next week. Duncan has made it clear he intends to resign his seat soon, and said he doesn't want to stay in cabinet because Wynne needs a new team to lead the government.

"I'm feeling the party needs to renew itself, and therefore people like me need to step aside," he said.

Environment Minister Jim Bradley -- the longest serving member of the legislature -- denied reports suggesting he too plans to quit, and said he plans to run for re-election in the next campaign.

"I'm happy to serve in whatever capacity the leader chooses," said Bradley, who blamed the Conservatives for rumours he was ready to resign.

McGuinty, who said he plans to stay on as an MPP until the next election, did not attend Tuesday's caucus meeting.