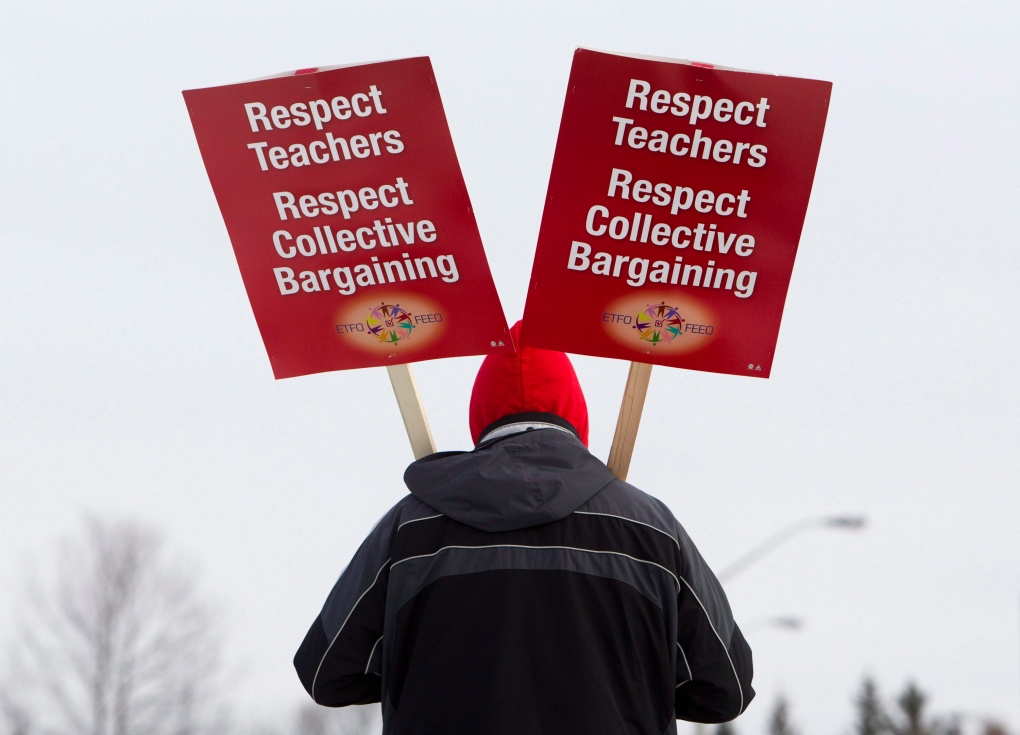 A teacher from the Ottawa-Carleton District School Board pickets in this Dec. 12, 2012 file photo. (Cole Burston/THE CANADIAN PRESS)

TORONTO -- Ontario's premier-to-be is promising to change the tone between teachers, school boards and the government to end the labour strife over imposed contracts.

Premier-designate Kathleen Wynne said Friday she wants to repair the relationship with teachers and school boards so they can work together to improve education in Ontario.

Speaking to members of the Ontario Public School Boards' Association, the former education minister said she's already reached out to union leaders, her caucus and the opposition parties to find a way to move forward.

"You know how close to my heart the work that you do is, and I also know the pain that you've been going through in the last few months," said Wynne, a former school trustee.

"I've felt it. You know I have. And I want to reassure you that the process going forward is going to change. It's going to be different. We are going to restore that respectful dialogue."

But it's unclear whether Wynne will be able to succeed in bringing extracurricular activities back.

The governing Liberals outraged public school teachers when they forced new two-year contracts that cut their benefits and froze the wages of most educators.

Many teachers have stopped supervising extracurricular activities in protest of the move, as well as the controversial anti-strike legislation passed in September that gave the government the power to do it. Bill 115 was repealed a week ago, just before the leadership convention, but the contracts still stand.

Wynne has said that she won't tear up the imposed contracts, but will talk with the unions about how they can approach the next round of negotiations in 2014.

"I don't know what Ms. Wynne is going to be able to put on the table to win back that trust and rebuild that trust," said New Democrat Catherine Fife, a former trustee and president of the Ontario Public School Boards' Association.

"I think the damage has been done."

The minority Liberals also alienated school boards, who were under pressure to strike local agreements with teachers before January.

But the trustees attending the convention welcomed Wynne with open arms Friday, giving her standing ovations and expressing hope that she'll be able to turn things around and end the dispute.

With Wynne, what you see is what you get, said Howard Goodman, a school trustee who succeeded her at the Toronto District School Board. She is a great listener and asks a lot of good questions to get a better understanding of what she's dealing with, Goodman said.

"There are seeds all over the place to fix the problems, and she's going to water them," he said.

"She really understands all the issues very deeply."

But Wynne still has a long way to go before she can mend fences with teachers, after voting in favour of Bill 115 that has deprived students of a quality education that includes school clubs and sports teams, said Fife.

"Talking about a new process today was very interesting," she said. "We have a new process in the province of Ontario: It's called imposing contracts on public sector workers."

But Fife said she was glad to hear Wynne say that she wants to work together with NDP Leader Andrea Horwath on improving youth employment.

"It's the kind of issue that I think reaches across party lines," Wynne said. "And if we can find a way to do that, then we can govern together."

The premier-designate, who will officially take over from Premier Dalton McGuinty on Feb. 11, said she has other ideas for improving education.

She wants students to have "critical thinking skills," not just literacy and numeracy, she said. The province should also broaden how it measures success in education and develop strategies to improve achievement among aboriginal students and youth who are in care, she said.