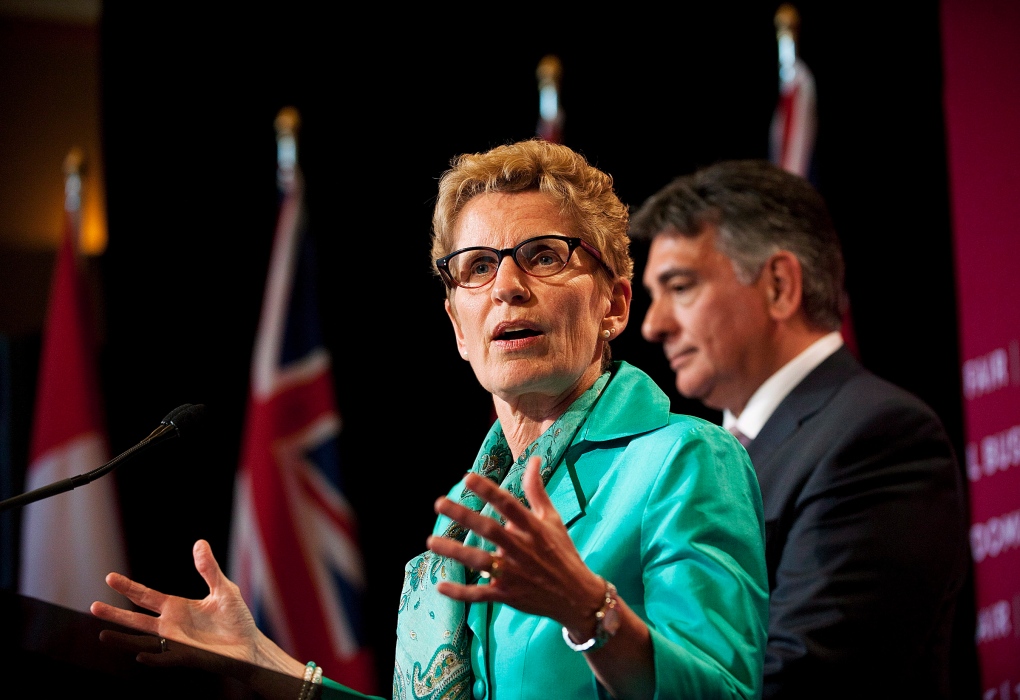 Ontario’s scandal-plagued Liberals have slipped behind the Tories in popularity as the opposition parties continue to grill Premier Kathleen Wynne’s government over the gas plants controversy, a new poll suggests.

The Forum Research poll asked 1,037 randomly-selected Ontarians who they would vote for if an election were held today, with 35 per cent saying they would cast a ballot for the Progressive Conservatives.

The Liberals finished second in the poll with 33 per cent of the support, down from 38 per cent in last month’s survey. Support for the Tories remained relatively stable (34 per cent last month).

“It’s clear some of the shine has come off Kathleen Wynne’s government, now that people have had a chance to see it work,” Forum Research president Lorne Bozinoff said in a news release. “The gas plants controversy can’t be helping, either. It appears Ontarians are just less certain about their electoral preferences now.”

In third, the NDP would take almost a quarter of the vote (24 per cent), up from 21 per cent a month ago, the poll found.

In that scenario at the ballot box, the Liberals would take a one-seat majority with 54 seats, followed by the PCs at 42 and NDP at 11.

Currently, the Liberals have a minority government with 50 seats in the 107-seat legislature, but that figure is about to drop to 48 as Liberal MPPs Laurel Broten and Margarett Best resign. The Tories hold 36 seats and the NDP have 18.

Once Broten and Best officially resign, there will be five vacancies. They are the fourth and fifth Liberal MPPs to step down since Wynne took over from McGuinty in January. Byelections have not been called in any of the vacant ridings.

According to the poll, Wynne’s approval rating has dropped to 37 per cent from 41 per cent a month ago.

The poll asked people who they think would make the best premier. Twenty-two per cent picked Wynne, while Horwath and Hudak each scored 20 per cent.

Perhaps surprisingly, 24 per cent of respondents chose “none” and 13 per cent said they have no opinion.

Nearly half of respondents (49 per cent) said a provincial election is not needed right now.

The interactive voice response telephone survey was conducted Wednesday, a day after former premier Dalton McGuinty testified a second time at legislative committee hearings into the cancelled gas plants in Mississauga and Oakville.

Nearly one-third of the poll’s respondents (32 per cent) said McGuinty would be remembered as one of Ontario’s worst premiers, Forum Research said.

Results based on the poll’s total sample are considered accurate to within three per cent, 19 times out of 20, Forum Research said.