What will it take to get you to vote? 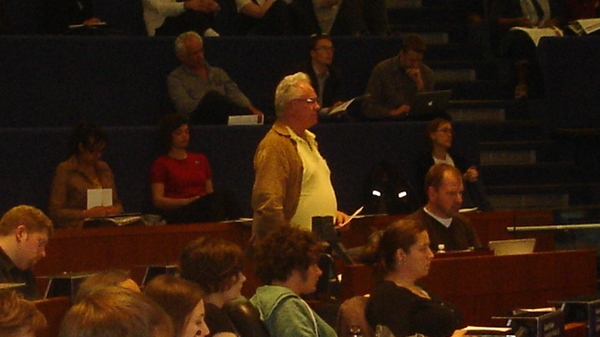 Bruce Wood, an Oshawa resident who says he'd like to see election reform in his city, speaks out at the Better Ballots town hall meeting in Toronto on April 26, 2010.

Bylaws aren't sexy, and neither is the issue of snow removal or parking tickets. Not even a sex scandal could make the TTC sexy and frankly even Toronto's mayoral race is looking like it will be a snoozer.

Heck, we're not even surprised anymore when the stats come out at the end of each municipal election that highlight our dismal voting record. In 2006, less than 40 per cent of Torontonians even bothered to get out and cast a ballot.

So what will it take to get the masses interested in the one level of government that actually has the most impact on their daily lives?

That's the question Toronto activist Dave Meslin and a group of advocates have asked at town hall meetings across the city this month, including one in dowtown Toronto and Etobicoke this past week.

The group, which call themselves Better Ballots, has put together a list of 14 options for the public to consider, all of which are aimed at getting voters interested in municipal politics.

The plan is to gather enough public consultation on the different options and then go to the province and the city with their findings and a proposal to shake up the system.

"City council is important but the system isn't working," Meslin said at the start of Tuesday's town hall meeting at Toronto City Hall.

"We have so much pride about being the most diverse city in the world but it doesn't mean much when the people who make up our city council look more like the Maple Leafs than the city itself," he said.

So what's the solution? Do we extend the vote to permanent residents? Lower the voting age to 16? Implement a phone/Internet voting system?

How about advocating for municipal political parties (though some would argue party politics are already at play) or setting term limits to stop council's old timers from running again?

Should we have a ranked ballot system? Force councillors to run city wide instead of in their neighbourhoods? What about finance reforms?

The Better Ballot presenters gave the 200-member audience some examples of cities where these specific types of reforms are in place.

"That was important to us because we wanted to show that these are viable options in places elsewhere," said Meslin.

The organizers had to concede, however, that they had little information about how successful many of these reforms have been at getting more people out to the polls.

But that wasn't the biggest problem facing the Better Ballots meeting.

You could call the members of the audience the usual suspects – candidates running for office this year, local activists who attend all politically-minded meetings, socially-conscious youth who want so badly to believe they can make a difference.

But these people are the ones who tend to go out and vote in the first place. Where were the soccer moms or ratepayer presidents? The Bay Street trader or the local gardener?

The process has to start somewhere, said Susan Gapka, who is running in Ward 27 for councillor.

"Electoral reform is critical for us to become involved in politics," she said at the podium, after congratulating Better Ballots for putting on the event.

Janet Davis, a councillor who is running for re-election in the east end, said the biggest threat facing local politics is cynicism.

"Remember, politics is a job that a lot of people can do and the majority do a good job," she said.

These were the ideas that got the most attention at the town hall meeting: