What does a 'strong mayor' system mean for Toronto?

What does a 'strong mayor' system mean for Toronto?

A so-called “strong mayor” system could be coming to Toronto soon, providing the mayor with executive power to pass legislation without the support of some council members.

Last week, Ontario Premier Doug Ford announced the system could be coming to Toronto, Ottawa, and possibly other municipalities ahead of the municipal elections in October.

Ford suggested that the powers could help pass building proposals and legislation faster in an effort to create more homes to combat the city’s housing crisis.

“They're (mayors) accountable for everything. But they have the same single vote as a single councillor. And no matter if it's a good decision or a tough decision that they make, they have to be accountable and (“strong mayor” powers) just allows them the ability, not the power. I always say we have a tremendous amount of responsibility and ability to make the appropriate changes,” Ford told reporters.

Toronto Mayor John Tory, who is seeking re-election, said he has and continues to support the use of the “strong mayor” system, and that it would help address the need for more affordable housing. 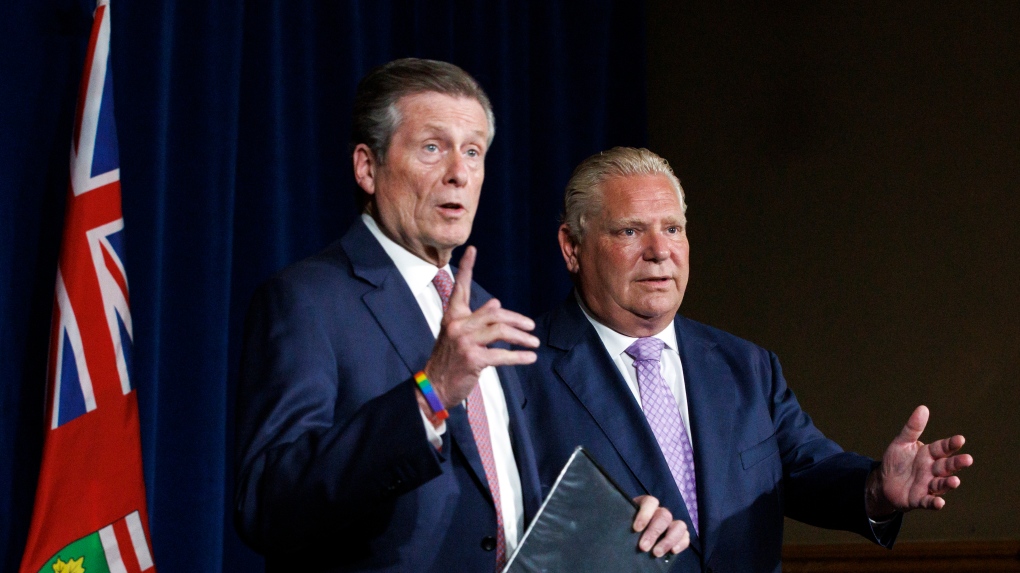 “I understand this is something that the province is exploring in order to get more homes built as quickly as possible. As mayor, I am absolutely determined to get more housing built – no matter what powers I have as mayor,” he said in a statement.

But what exactly are “strong mayor” powers and how do they work?

WHAT ARE 'STRONG MAYOR' POWERS?

Currently, Toronto and the rest of Ontario have a so-called “weak mayor” or “council-manager” system, which simply means a mayor is elected and only represents one vote in all of council.

Whereas the “strong mayor” system would grant unilateral authority to the mayor.

“In general, what's really different about the’ strong mayor’ system is that the strong mayor is elected with an agenda and is empowered to try and enact that agenda,” Karen Chapple, director of the School of Cities at the University of Toronto, told CP24.com.

“And so in a ‘strong mayor’ system the mayor really controls the budget typically. And that makes it possible then, that's how they get to enact their agenda because they have control over the budget.”

CAN COUNCIL OVERRIDE THE MAYOR?

If the ‘strong mayor’ system comes to Toronto, the mayor could risk being vetoed by city council.

Ford said a majority of council members would be able to override the mayor’s decision, but the specifics of the system still need to be ironed out.

“Two-thirds of the council can overrule the mayor but we'll get more into the in-depth once everything goes through there,” he said.

“What you would see is the province saying, ‘look, we're gonna enhance the powers of the mayor but you're not going to have unilateral control over everything.’ That I think would be completely unwise and would take away the benefit or really it would be anti-democratic because you'd have these council members who would be there doing, what? Nothing. You'd be essentially getting an autocrat in power,” he said.

If council were to override the mayor’s decision, then Chapple says they would likely have to “start from scratch” and negotiate something new.

HOW WILL THE 'STRONG MAYOR' SYSTEM HELP BUILD MORE HOUSING?

As Toronto continues to tackle an affordable housing crisis with rising demand and inadequate supply, the “strong mayor” system could help to speed along the process of building more homes.

Chapple says the system could reduce the number of roadblocks in passing building proposals, as some councillors reject housing-related votes to appease their constituents.

“I think that's the hope is that you could overcome this a bit and be able to make decisions about housing that would be good for everybody and not subject to the whims of a few people that tend to be the affluent, more affluent people that have housing already and don’t have a problem,” she added.

Ontario’s Ministry of Municipal Affairs and Housing says any upcoming changes to the mayoral structure will help to address the city’s housing issues.

“We know that today in Ontario, too many families are frozen out of the housing market. That’s why we have a plan to build 1.5 million homes over the next 10 years and continue to explore ways to help municipalities get more homes built faster,” Chris Poulos, the ministry’s director of issues management, said in a statement.

DO OTHER NORTH AMERICAN CITIES USE THE 'STRONG MAYOR' SYSTEM?

New York and San Francisco are some examples of big North American cities that are currently using the “strong mayor” system.

The system typically gives executive power to the mayor, who then has control over department head appointments, oversees budgets, and sometimes is granted veto power.

Chapple says there are more “council-manager” systems in place in the United States than the “strong mayor” system, but she says that appears to be changing.

“Recently, there's been a trend that cities are more likely to try to move into a ‘strong mayor’ system than they are to try and move into a strong council, city manager system. And there seems to be a pattern where the big cities are going with the strong mayors, and the ‘council-manager’ system is holding really strong with the smaller cities,” she said.

WHAT ARE THE BENEFITS OF A 'STRONG MAYOR' SYSTEM?

Chapple says she supports the system because it makes the mayor accountable and provides a layer of transparency to the public on how councillors are voting on certain issues.

Chapple added a “strong mayor” system could also give Toronto a new status of worldwide recognition.

“Strong mayors sort of get a celebrity (status) around them, like (former New York City Mayor Michael) Bloomberg or like Eric Garcetti in Los Angeles or Gavin Newsom in San Francisco who was a strong mayor,” she said.

“He (Newsom) was able to advocate for same-sex marriage. It was really his work that got same-sex marriage ratified by the Supreme Court because he said ‘we're San Francisco, we’re going to do it.’ And so it creates a platform to really push for meaningful social change,” she added.

WHAT ARE THE ARGUMENTS AGAINST A 'STRONG MAYOR' SYSTEM?

Some city councillors argue that the powers could be detrimental if given to the wrong person.

“The debate is not about Tory, not about left or right, not about efficiency, but about the possibility of power in the wrong hands without any recourse. It also strips Toronto communities of their representation in key debates,” Ward 11 Councillor Mike Layton tweeted last week.

Mascarin says there would need to be “checks and balances” in place to ensure Toronto’s government remains a democracy.

“The mayor can maybe control the agenda and can control the budget but doesn't have unilateral rights over everything, and may be able to veto certain things but not everything.”

Refugee advocates are raising concerns that Afghan refugees granted asylum in Canada are being burdened by escalating costs stemming from the government’s delay in processing their claims.

Canadians can write to Santa in the language of their choice, Canada Post says, after some express confusion

After some people expressed confusion online over what languages Canada Post will accept from Canadians writing to Santa this holiday season, the corporation says it accepts letters in any language.

Canada's housing advocate says during a tour this fall of several Inuit communities she got a glimpse into the dire living conditions many have faced for years.