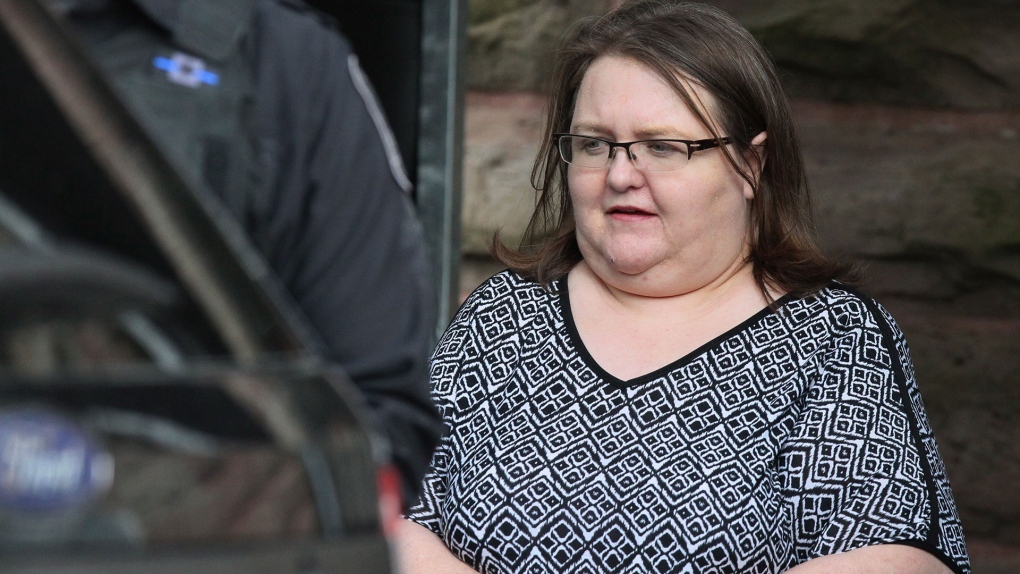 Elizabeth Wettlaufer is escorted by police from the courthouse in Woodstock, Ont, Monday, June 26, 2017. Wettlaufer, a former Ontario nurse who murdered eight seniors in her care, was sentenced Monday to life in prison with no eligibility for parole for 25 years.THE CANADIAN PRESS/Dave Chidley

TORONTO -- A surviving victim, relatives of murdered seniors, and advocacy and health-care groups are among 17 groups and entities granted permission to take part in a public inquiry sparked by nurse Elizabeth Wettlaufer, who is serving life for killing eight elderly long-term-care residents in Ontario.

In her decision released Thursday, Commissioner Eileen Gillese said survivor Beverly Bertram along with victims' family members and close friends -- organized into three separate groups -- will have the right to call and question witnesses.

"It is self-evident that each of these applicants has a substantial and direct interest in the subject matter of the inquiry," Gillese wrote in her decision. "Each has suffered, and indeed continues to suffer, as a direct result of the offences."

Given their direct knowledge of the offences and surrounding circumstances, their participation will "further the conduct" of the hearings and contribute to their openness and fairness, Gillese said. To facilitate participation, the commissioner also recommended the government provide them financial aid.

The Ontario government set up the Long-Term Care Homes Public Inquiry in August after Wettlaufer, 50, was convicted of eight counts of first-degree murder, four counts of attempted murder and two counts of aggravated assault. Wettlaufer had pleaded guilty in June and was jailed for life without parole eligibility for 25 years.

The province, the regulatory body for nurses, and the facilities where Wettlaufer killed her victims all have a strong and direct interest in the proceedings and were also granted full standing, Gillese decided. Most of the killings took place at Caressant Care in Woodstock and one in Meadow Park in London.

Other organizations representing doctors, nurses, registered practical nurses and other clinicians who work in nursing homes will also be allowed to participate fully.

"Although these organizations were not directly involved with Elizabeth Wettlaufer or the events in question, each offers a unique, representative perspective," Gillese wrote. "Each has played, and continues to play, an active role in shaping the policies, procedures and practices."

Three of those entities should receive government funding to defray their legal costs, Gillese ruled.

In all, 50 applicants applied for standing. Gillese rejected requests from seven individuals with friends or relatives in nursing homes, and another 10 who have worked in the facilities. Those people are either not closely enough connected to what happened or will see their viewpoints reflected by those who were granted standing, Gillese said, adding they can still make written submissions.

The third-party New Democrats said the exclusion of some families and care workers who wanted to testify in person shows the need for a second-phase, broader-based hearing into long-term care in Ontario.

"It's now clearer than ever that families are being let down and the Wettlaufer inquiry alone is inadequate," NDP Leader Andrea Horwath said.

Wettlaufer injected her victims with insulin at three long-term care facilities and a private home between 2007 and 2016. She was fired twice during her career -- the first time in 1995 -- but kept her licence as a registered nurse. She confessed to police to feeling a "red surge" that made her think God was directing her murderous actions.

Bertram, who was 68 at the time, has previously described the pain she felt after Wettlaufer gave her a massive overdose of insulin in a failed effort to kill her.

"I knew I was dying," Bertram said. "I was doubled over in pain."

Gillese, a justice of the Ontario Court of Appeal, is expected begin hearing from witnesses in June and report by July 31, 2019.