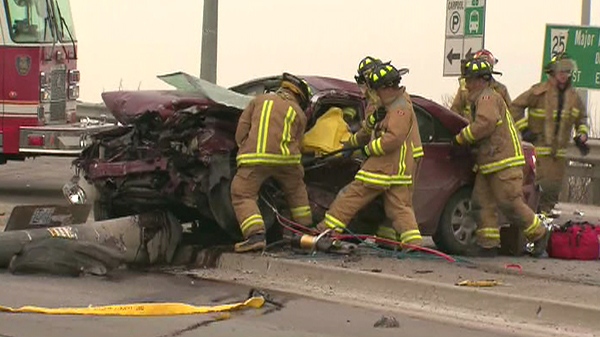 Vaughan Fire and Rescue Service work to free an injured driver from a vehicle involved in the crash, Tuesday, Feb. 2, 2010.

A Vaughan firefighter has been fined $500 for a February incident in which a fire truck he was driving ran a red light, colliding with a car and leaving that vehicle's driver dead.

According to a news release issued Wednesday by York Regional Police, Gianmarco Solimena, 30, entered a guilty plea before a justice of the peace to one count of "disobey red light -- fail to stop."

At about 10:35 a.m. on Feb. 2, a Vaughan Fire and Rescue Services pumper truck with emergency equipment turned on was heading to a call, eastbound on Major Mackenzie Drive West.

It struck a northbound Toyota that had exited from the northbound lanes of Highway 400 and was turning left onto Major Mackenzie. The light had turned green for the Toyota's driver.

"The impact caused the Toyota to spin and then strike a light standard," police said.

Paramedics took the Toyota's driver, who was the only occupant of his vehicle, to hospital. Doctors there pronounced him dead.

After the collision occurred, the firefighters immediately went to work trying to extricate the Toyota's driver from the vehicle.

Police said at the time that emergency vehicles do not have the right-of-way and can only enter intersections if it is safe to do so.

York Police said the Toyota driver was the 11th of 23 people to die on the region's roadways so far in 2010.