TORONTO -- A man and woman are dead after a vehicle and a transport truck crashed in Mississauga on Wednesday morning.

Police said they were called to the area of Hurontario Street and Matheson Boulevard at 5:20 a.m.

The man and woman were pronounced dead at the scene, Peel paramedics said. 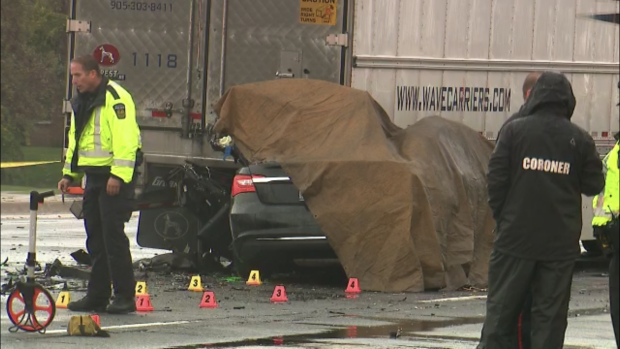 The circumstances surrounding the crash are not yet clear.

The driver of the truck was not injured, police said.

COLLISION:
-Hurontario St / Matheson Blvd E #Mississauga
- Vehicle and Transport Truck
- Hurontario shut down north and south from Matheson
- Matheson shut down east and west from Hurontario
- No further details from the scene yet
- Updates will follow
- C/R 5:19am
-19-0378472 pic.twitter.com/S5Jpax2zb5