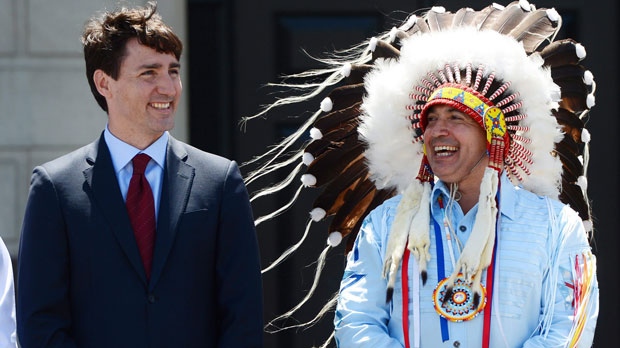 OTTAWA -- Prime Minister Justin Trudeau joined indigenous leaders across from Parliament Hill on a sun-drenched Wednesday and said the building housing his office will no longer bear the name of Hector-Louis Langevin, a father of Confederation and an architect of the residential school system.

Then, standing outside 100 Wellington St. -- the former U.S. embassy set to become a designated space for First Nations, Inuit and Metis people by 2023 -- Trudeau pointed at the former Langevin Block a stone's throw down the street.

"We've heard from you and the TRC (Truth and Reconciliation Commission) and from many indigenous communities over the past year that there is a deep pain in knowing that ... building carries a name so closely associated with the horror of residential schools," Trudeau said.

The old limestone building, completed in 1889, will now "officially and practically" be called the Office of the Prime Minister and the Privy Council, he added.

The crowd, gathered in a circle close to the podium where Trudeau was speaking, began to cheer and Assembly of First Nations National Chief Perry Bellegarde jumped to his feet, smiling and applauding.

Later, Bellegarde thanked the prime minister, saying he listened to indigenous people who expressed concerns about the Langevin Block.

In February, a group of indigenous MPs -- Independent Hunter Tootoo, the NDP's Romeo Saganash and Georgina Jolibois and members of the Liberal indigenous caucus-- also asked the federal government for a new name.

Jolibois, who tabled legislation this month calling for National Aboriginal Day to be a statutory holiday, said Wednesday it would have been helpful if Trudeau consulted the indigenous MPs on the name change.

"It is just another building saying the Prime Minister's Office," she said. "That's fine, but it ... is still a colonial system. It doesn't really signify an aboriginal name, an aboriginal historical person."

Langevin, who died in 1906, was a lawyer, newspaper editor and Conservative MP from Quebec. He spent more than 25 years in federal politics, resigning as public works minister in 1891 amid a corruption scandal.

It was in his role as minister of public works that Langevin argued for a separate school system with a specific mandate to assimilate indigenous children.

On Wednesday, Trudeau also confirmed indigenous communities will be consulted on how best to use the former U.S. embassy.

The building is a prime piece of real estate, Indigenous Affairs Minister Carolyn Bennett said, adding it will send a clear signal that First Nations, Inuit and Metis people represent the most important relationship to Canada.

Natan Obed, the president of Inuit Tapiriit Kanatami -- a national Inuit organization -- said the announcement for 100 Wellington St. is an important step in the path toward reconcilation.

"In many cases, indigenous peoples have to fight every single step of the way for very small, incremental gains, whether it be through Supreme Court rulings or land claim agreements," he said.

"I want to pause and thank this government, especially the prime minister, for his willingness to take upon his shoulders decisions that improve the lives of indigenous peoples without decades of fighting and pushing back."

Clement Chartier, the president of the Metis National Council, said the transfer of the building to Indigenous Peoples marks a milestone.

"Parliament and the power it represents remains far removed from our needs, our hopes, our dreams," he said. "But today's transfer is an important step toward bridging that gap."

U.S. Charge d'Affaires Elizabeth Aubin, the ranking American diplomat in Canada until a new ambassador is confirmed by the Senate, also praised the decision.

"On behalf of the U.S. mission to Canada, I wish to applaud the Canadian government's decision to refurbish the former embassy building at 100 Wellington St., and repurpose it as a new space for Indigenous Peoples," she said in a statement.