A Toronto transit advocacy group is calling for increased funding for additional safety measures in the city’s subway stations after a woman was pushed onto the TTC tracks Sunday afternoon.

The incident happened at Yonge Station just after 9 p.m. When emergency crews arrived, they found the victim conscious and breathing, police said. She was rushed to a trauma centre in serious but stable condition. It was later confirmed the victim sustained a broken rib.

Police are currently searching for the person they believe to be responsible.

Shelagh Pizey-Allen, executive director of TTC Riders, told CP24 Monday afternoon that more measures, including platform edge doors (PEDs), need to be installed in order to keep travellers safe. She said that when platforms get overcrowded, the danger of falling onto the tracks is increased and current measures aren’t cutting it.

Platform edge doors are used in some transit stations to serve as a barrier between the platform and tracks. The City of Toronto has long considered the installation of PEDs, but in recent years, funding allocated to the measure has been absent from municipal budgets. 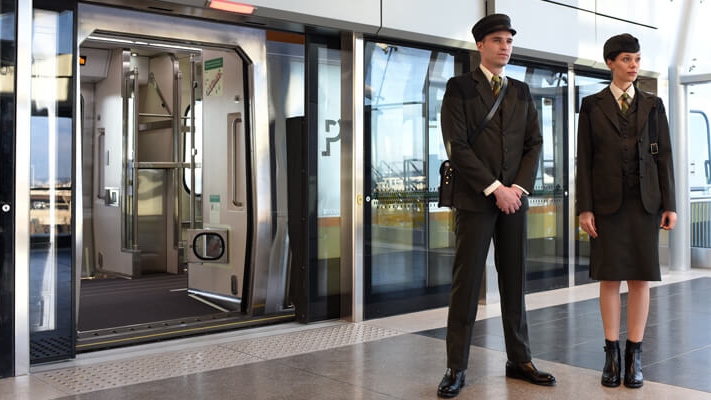 Platform edge doors are shown at the UP express station (UPExpress)

“We hope that this near-miss, horrible accident [prompts] politicians to look at making the investment into the TTC,” she said.

“The 15-year capital plan has a total cost of $37 billion, and so far, only $12 billion has been allocated, so we need capital investment into TTC, not just the lines, but … also in ongoing operations funding as well.”

In 2021, the TTC reiterated its intention to phase out its two-crew system and run one-operator subway trains, eliminating a subway guard position – something activists have flagged as dangerous. The Amalgamated Transit Union (ATU) Local 113, which represents nearly 12,000 TTC workers, called the move “reckless.”

When reached for comment, TTC spokesperson Stuart Green told CTV News Toronto that, “like everyone, we are shocked by this horrific attack and our thoughts are with the victim for a quick and full recovery.”

Green added that the TTC is looking into the feasibility of additional safety measures.

“As for platform edge doors, the feasibility of those [are] already being studied as part of the expansion of the ATC (automatic train control) project,” he said, adding that a successful installation would require major construction at all subway stations. “PEDs require ATC to work and would require significant redesign and infrastructure changes to install them on existing platforms.”

Pizey-Allen says she knows these safety measures could be years down the line and, in the meantime, suggests keeping as close to the wall as possible while waiting in a station.

“But, the point is that that's not always possible as more riders return to the system,” she said.

“We need all levels of government to be investing in the capital needs of the TTC.”