Hundreds of tow truck drivers from across the province gathered near Port Perry Wednesday to honour their colleague who was killed while helping a motorist last week.

Beverly Todd Burgess, 56, of Oshawa was on Highway 12, between Scugog Line 2 and Scugog Line 3, assisting a driver who had driven into a ditch in the area. 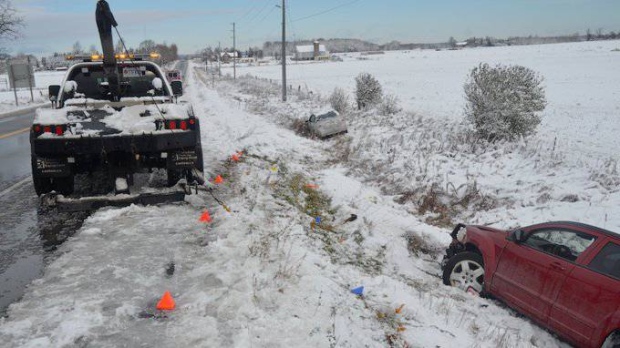 Police said that’s when another vehicle lost control and struck Burgess. He was pronounced dead at the scene.

Affectionately known as the unofficial ‘Mayor of Port Perry’, friends of Burgess call the tribute to their fallen colleague a “tearjerker.”

“It really opens your eyes how much we stick together. How much brotherhood there is around here,” Brad Fenney, a fellow tow truck driver and friend of Burgess for more than 15 years, told CTV News Toronto on Wednesday.

“It’s a huge wake up call,” Matt Tuach from Ultimate Towing said. “It’s always dangerous, everyone’s always aware. But nothing like this ever happens so close to home. It’s crazy to be honest.”

Amid the tributes, drivers in attendance said that the message moving forward is clear: Slow down and move over.

“I liken it to trying to do a job on the side of a NASCAR racetrack. Guys are going by you at 100 kilometres an hour, within inches of you just trying to do your job,” Mark Colbran of Sarnia’s Preferred Towing said.

“A lot of times were rescuing somebody out of a ditch or getting somebody to safety., rying to keep ourselves safe as well, so your heads always got to be on a swivel when you’re out there.”

A GoFundMe campaign has been set up to pay for Burgess’ funeral and memorial. The fundraiser has surpassed its original goal of $10,000 with donations sitting at just over $22,000 on Wednesday.