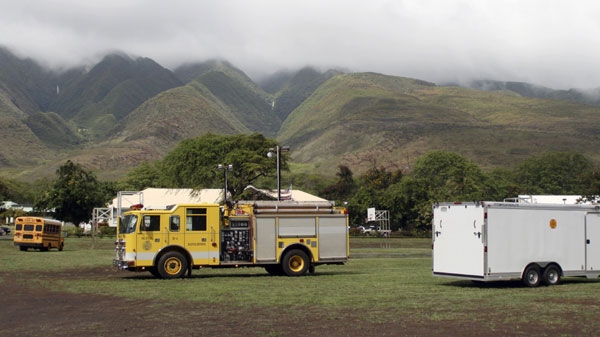 Emergency vehicles from are positioned near Kilohana Elementary School on Molokai, in Hawaii, Thursday, Nov. 10, 2011, after a helicopter taking four tourists on an excursion over the island crashed into a mountainside near the school killing all of the tourists and the pilot, according to authorities. (AP Photo/Joey Salamon)

Police have identified the two Toronto tourists who died in a fiery helicopter crash in Hawaii that claimed the lives of all on board.

Stuart Robertson, 50, and Eva Birgitta Wannersjo, 47, both of Toronto died when the chopper, carrying a pilot and two other tourists, crashed into a mountain ridge on Hawaii's Molokai island on Thursday.

Police said that the pilot, Nathan Cline, 30, of Kihei, Maui, and a honeymooning couple, Michael Todd Abel, 25, and Nicole Belivacqua-Abel, 28, both of Pittsburg, Pennsylvania, also died.

Blue Hawaiian Helicopters, the operator of the helicopter, said on Friday that the helicopter departed from Kahului, on Maui, for a 45-minute tour.

The chopper crashed shortly after noon local time near an elementary school amid rainy weather.

The crashed helicopter was a Eurocopter model EC-130 B4 that was less than a year old, Blue Hawaiian Helicopters owner David Chevalier said.