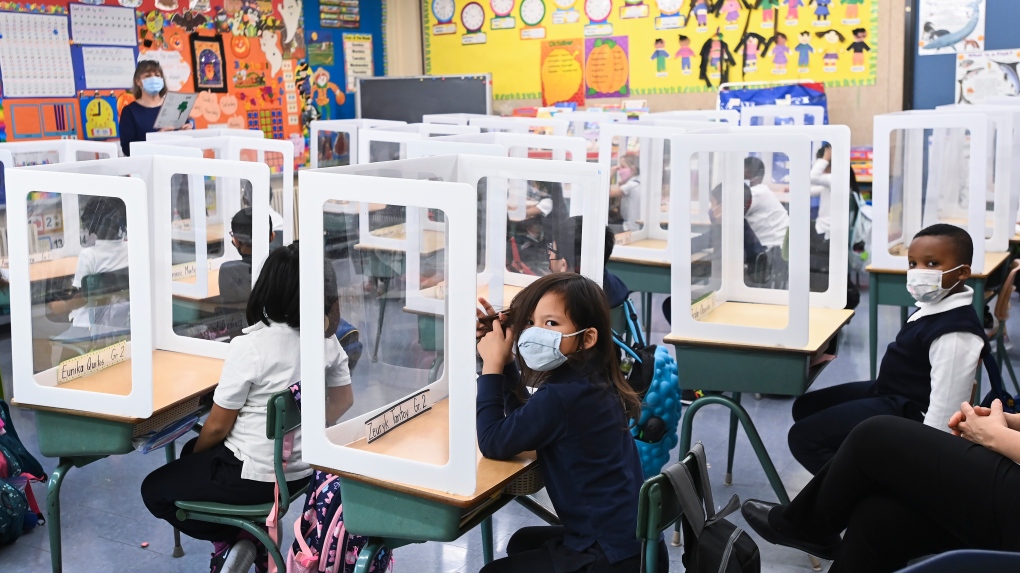 Children wearing masks sit behind screened in cubicles as they learn in their classroom after getting their pictures taken at picture day at St. Barnabas Catholic School during the COVID-19 pandemic in Scarborough, Ont., on Tuesday, October 27, 2020. THE CANADIAN PRESS/Nathan Denette
TORONTO -

Parents of elementary school children in Toronto are expressing concern after their children were asked not to speak during lunch in an effort to curb transmission of COVID-19.

Teresa Ostrom told CTV News Toronto on Friday that her child, who attends Alvin Curling Public School in Scarborough, has been asked not to speak during the period in which they are unmasked and eating lunch.

While the health and safety measure is meant to minimize aerosol transmission the virus, some parents are concerned that the time, usually meant for socialization, is being replaced with screen time.

She says she didn't find out about the policy until she had a chance to meet her child’s teacher face-to-face.

“My kid had never mentioned it, so I was actually shocked,” Ostrom said. “We were told that the kids were not permitted to speak while eating lunch because they remove their masks to eat.”

Ostrom said she worries about her child’s ability to socialize.

“I just felt so sad for the kids,” she said. “They've missed out on so much and especially so much unstructured socialization, which is what chatting with friends during lunch is, so it just seemed like one more thing taken away from them.”

When reached for comment, the Toronto District School Board’s spokesperson, Ryan Bird, told CTV News Toronto that, “based on the advice of Toronto Public Health, we have required lunches to be brief and quiet.”

He says this guidance has been in place since September 2020.

“By keeping talking to a minimum while eating and while masks are off, we are reducing the possibility of spread of COVID-19,” said Bird, adding that when mealtime is over, children are then permitted to go outside, where they can talk freely.

Children born after 2009 are currently not eligible to receive a COVID-19 vaccine, meaning the majority of elementary school students remain unvaccinated. Toronto's medical officer of health, Dr. Eileen deVilla said on Wednesday that she hopes to see approval to vaccinate children ages five and up in the coming weeks.

Narie Ju Hong, a parent of two TDSB students, said that her children have also been directed not to speak during their mealtime. She says she is also concerned about a lack of socialization and described the policy as “cruel.”

“I'm a high school teacher and we don't tell the students not to talk,” Hong said.

She said that her child’s teacher often plays french television shows during this time.

Another TDSB parent, Julia Lee, said that her child, who is currently in the third grade at Carleton Village Junior and Senior Public School, is often made to watch a movie during lunchtime, “so that the kids aren't moving around [and] talking while eating.”

A Toronto District School Board teacher, who asked not to be identified, told CTV News Toronto that they “often play a short educational TV show or learning video [while] kids eat their lunches.”

“They don’t feel hindered and they know that we try not to talk when our masks are off — for respect and safety for everyone,” they said.

The educator expressed concerns over parents hearing of the policy from their children without understanding “the bigger picture.”

“I worry when parents are being told a statement from children,” they said. “It is literally from the mouth of babes and what ends up happening is parents can only imagine what is going on based on their child’s words.”

A study conducted by researchers at ​​Toronto's Hospital for Sick Children over the summer suggested that the COVID-19 crisis has had a sustained and significant impact on youth’s mental health in Ontario and that screen time is partially to blame.

The early data, which had not yet been peer-reviewed, showed that more than half of 758 kids aged eight to 12 and nearly three quarters of 520 adolescents aged 13 to 18 reported significant symptoms of depression from February to March.

The study claims that increased time on screens “had a wide-ranging impact on the mental health of children and youth as well.”

“Kids need school, they need their friends and they need to have fun,” Dr. Daphne Korczak, principal investigator of the study and child and adolescent psychiatrist at SickKids, said in a release on the study.

“As our focus shifts to reopening society, we must have meaningful conversations about prioritizing the needs of children and youth.”