Toronto staff recommend that city bring back CafeTO, first patios could be installed in May if restrictions lifted 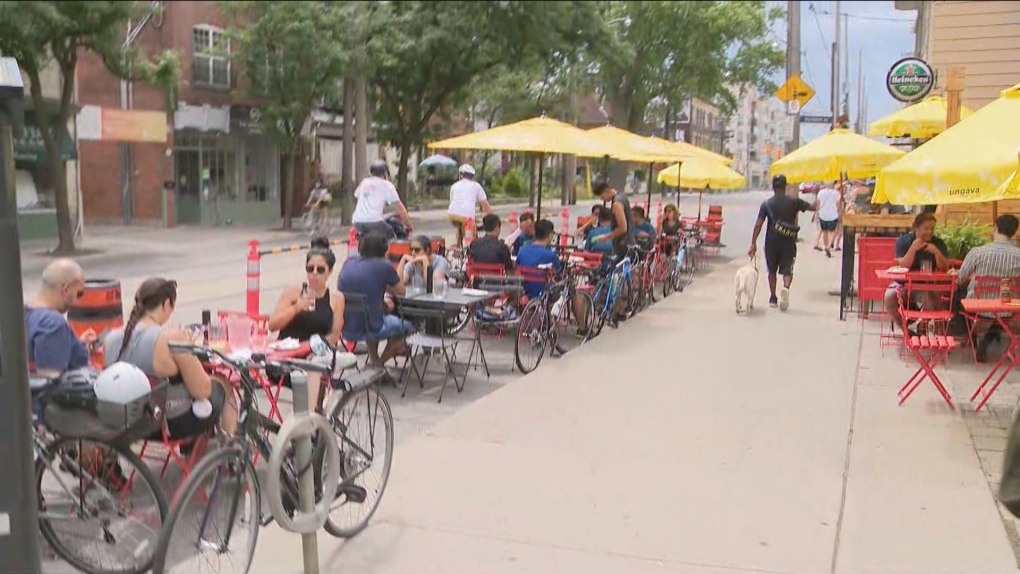 TORONTO -- Staff are recommending that the city bring back its popular CafeTO program, which saw hundreds of patios set up on sidewalks and in curb lanes in response to the COVID-19 pandemic last summer.

In a report that will go before Mayor John Tory’s executive committee next week, staff lay out their plan for the return and expansion of the program pending changes to public health restrictions to again permit outdoor dining.

Unlike last year, when the first patios only opened at the end of June, staff are recommending that the city begin accepting applications in February allowing for the first curb lane patios to be installed as early as May.

They also want to tweak the program to allow restaurants and bars to build temporary decks and platforms in curb lanes after initially prohibiting them from doing so in 2020.

Patio fees should also be waived again in 2021 given the “ongoing financial hardships faced by the restaurant industry,” staff say. That will result in an estimated revenue loss of $775,000.

The city will also face a further revenue loss of $2.5 million due to forgone parking revenue.

“This is proof that there is indeed a silver lining in most clouds,” Mayor John Tory said of the return of the program while speaking with reporters on Wednesday morning. “Jobs were retained (because of the program), businesses were saved - I don’t think it is an exaggeration to say that - and the quality of life in the city was improved for people. You know they enjoyed those patios. I can’t tell you how many people came up to me to say this was a really good thing to happen to our city and that is why it is not just a pandemic measure in my view; I think it something we will be having in one form or another in the city for many years to come.”

A survey conducted by the city last year revealed that 66 per cent of the 801 restaurants that participated in the program believed that their businesses would not have been financially viable without the extra space for outdoor dining.

About 95 per cent of respondents also indicated a desire for the program to be brought back in 2021.

“I made a commitment to help the entire restaurants and bar industry on a go forward basis and this report demonstrates that we are following through on that commitment,” Tory said.

The staff report says that 620 of the 801 participating restaurants in CafeTO in 2020 had curb lane patios, resulting in nearly 10,000 metres of closed curb lanes.

Staff do concede that there were some delays in setting up the curb lane closures in the early days of the program because it required 7,000 pieces of traffic equipment, like planters, concrete blocks and pylons, which were in short supply as many municipalities set up similar programs.

For 2021, staff say that they are purchasing 1,000 additional planter boxes and will also investigate alternative equipment options to ensure that the patios can be quickly installed once approved.