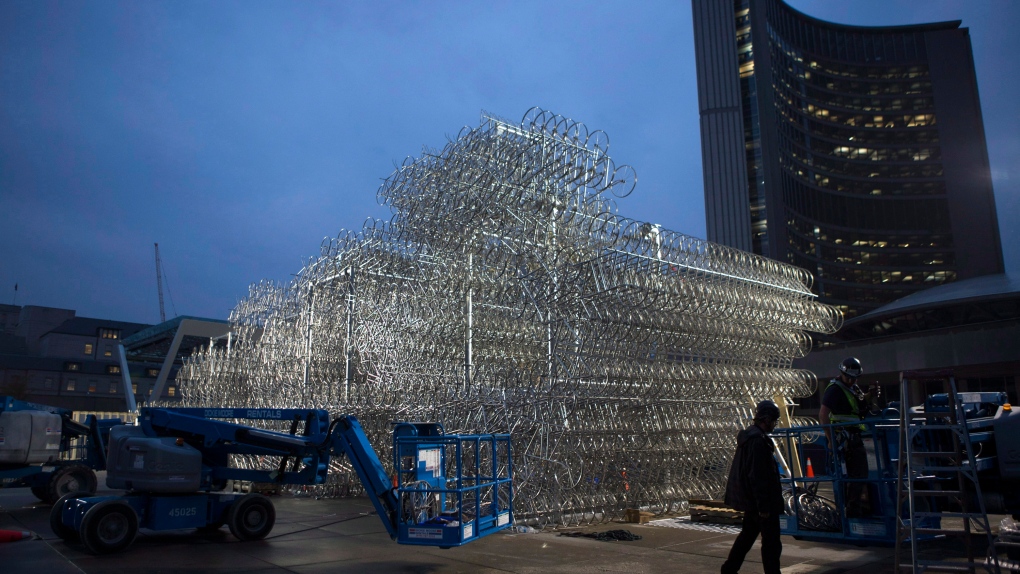 Toronto’s all-night art festival will return this fall after a three-year absence due to the COVID-19 pandemic and the event is expanding to include installation across the city.

The city confirmed in a news release on Thursday that Nuit Blanche will be held from sunset on October 1 to sunrise on Oct. 2.

The city says that the free event will include works by more than 150 artists and, for the first time, feature exhibition areas across Toronto, including downtown, Scarborough, North York and Etobicoke.

“We are ecstatic to bring to life the first-ever city-wide Nuit Blanche this fall which will be an epic return to a full public art takeover of Toronto,” Nuit Blanche Artistic Director Dr. Julie Nagam said in the release. “We will be showcasing a record number of artists who will be rupturing our city with incredible installations that are thought provoking, specular and filled with wonder. This 12-hour magical transformation includes massive light installations, sculptural interventions, inflatables, AR projects, performances, skateboarding, fashion and so much more. Nuit Blanche will light up the city with the creative energy that we all have been longing for.”

Nuit Blanche was one of dozens of popular events wiped out by the COVID-19 pandemic over the last few years.

Many of those events have, however, returned to the streets this summer, including the Caribbean Carnival Grand Parade set for the Exhibition Grounds this weekend.

The city says that 20 major institutions across Toronto will feature art projects and exhibitions free to the public throughout Nuit Blanch. There will also be 50 city-commissioned installations.

“I’m proud that the city is supporting this event that will activate neighbourhoods across the city including Etobicoke and North York which will host exhibition areas for the first time,” Mayor John Tory said in the release. “Nuit Blanche Toronto creates significant artistic and cultural energy in our city.”

The city says that Nuit Blanche has resulted in more than $443 million in economic impact for Toronto since its first event in 2006.

Lynn was mourned on social media by friends and fans who admired the pioneering woman of country music, whose story was told in the 1980 film "Coal Miner's Daughter."

'We all pay the price': Survey finds only 9 per cent of girls aspire to be prime minister

Fewer than one in 10 girls and young women in Canada say they ever aspire to be prime minister, according to a new report, which chalks up the lack of interest in the federal government’s top job largely to concerns about discrimination and sexism.

Seven women have filed a lawsuit alleging they were sexually assaulted by "various" on-duty officers with Newfoundland and Labrador's provincial police force between 2001 and 2017.

President Vladimir Putin, who rules the world's biggest nuclear power, has repeatedly cautioned the West that any attack on Russia could provoke a nuclear response. Will he use nuclear weapons and how might the United States and the U.S.-led NATO military alliance respond?