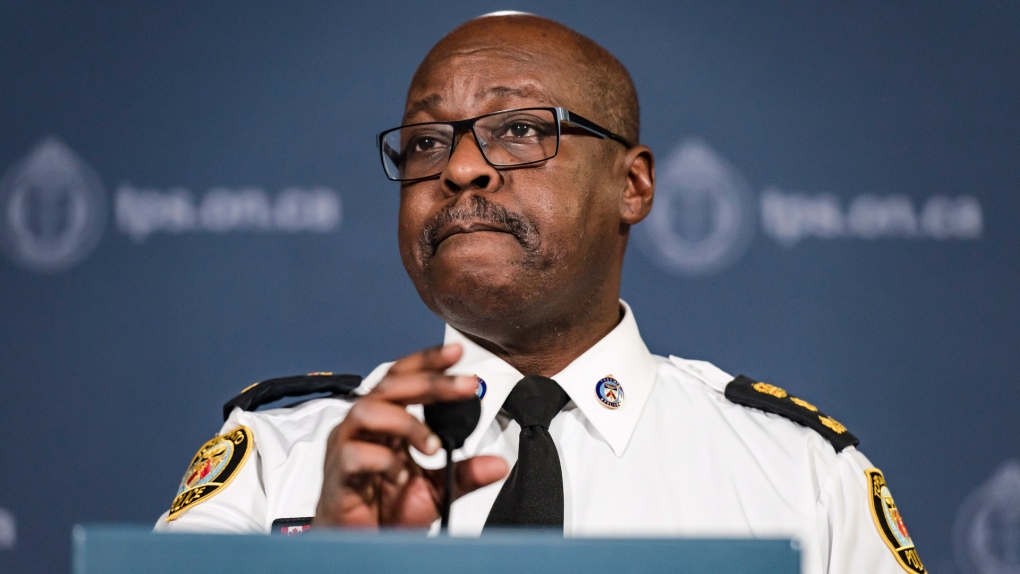 Toronto Police Chief Mark Saunders speaks to the media at a year-end news conference in Toronto on Thursday, December 27, 2018. THE CANADIAN PRESS/Christopher Katsarov

The Toronto Police Service will receive an increase to its $1 billion budget for the first time in three years, due in part to a need to hire additional officers.

The TPS was granted its request of $1.026 billion to fund its operations in 2019, which represents an increase of $30.3 million or three per cent from last year, after the Toronto Police Services Board voted on Thursday.

The police force says that the additional funding will help it hire 300 new uniformed officers, 122 special constables and 186 part-time retirees.

“In essence we are looking at approximately 450 human resources that are directly tied to (relieving) the frontline pressures," Toronto police Chief Mark Saunders told reporters after the meeting.

According to the report that went before the board today, the part-time officers will be used to handle non-emergency calls for service and to take reports over the phone and online, thus freeing frontline officers up to focus on “higher priority and emergency situations.”

With the new special constables and retirees, Saunders said frontline officers will have more time to deal with serious calls.

“Our frontline men and women who are highly trained, with their guns and with their sticks, with understanding of law will have more time and opportunity to do those priority one, two and three calls where they are the experts.”

The special constables will also be used to relieve pressure on frontline officers, according to the report. Some of the tasks that that they will perform include basic report taking, assisting with crime scene security, canvassing for witnesses and evidence collection and processing, among other things.

The planned hirings come in the wake of sustained criticism from the Toronto Police Association over an officer shortage that resulted from a hiring freeze which was in effect in 2016 and for most of 2017.

In the report, Saunders says that the hiring freeze and an increase in retirements have resulted in a nine per cent reduction in uniformed officers since 2015.

He said that the staffing crunch has resulted in significant overtime costs, which are not sustainable.

In 2018, the Toronto Police Service doled out an additional $22 million more than forecast in premium pay and in 2019 it is expecting to incur $52.4 million in premium pay costs, which would be an increase of 19.4 per cent compared to last year.

"There’s no doubt that the frontline men and women have seen higher pressures,” Saunders said of the past year.

“As the number of deployed officers decreases, the service has to heavily rely on premium pay to help ensure public safety is not compromised. This overreliance on premium pay is not sustainable as it leads to employee fatigue and burn out,” Saunders writes in the report. “Efforts are therefore being made to fill critical vacancies and transition to a new service delivery model to meet frontline demands as well as civilian support requirements.”

While the budget that went before the board on Thursday includes funding to hire hundreds of new officers, the total complement of uniformed personnel is not expected to increase significantly due to expected retirements and other departures from the service.

Those numbers will be supplemented by an estimated 184 civilian personnel, who will perform work previously done by police officers.

Speaking with reporters ahead of today’s TPS board meeting, Mayor John Tory said that he is fully supportive of providing additional funding to help the service hire additional officers and civilian personnel, particularly in light of a violent 2018 in which there were a record 96 homicides.

“If there is ever a tear that we make some investment in the police while still being very, very fiscally responsible this is the year,” he said. “Because we want to make absolutely certain that we are putting the resources in place, uniformed and otherwise, that will make sure that we can keep the community safe. That is one of our most important responsibilities as elected officials.”

While there were 295 departures from the Toronto Police Service in 2018, Tory brushed aside suggestions that the loss in uniformed personnel was a result of ongoing efforts to modernize the service.

He said that of those who left the force in 2018, only about 60 did so to take a job at another policing service.

“When you go through a modernization of any organization it means change, it means changing the way things are done, it means changing the duties and sometimes the shift schedule and other kinds of things for the people involved and that always has some impact because most people don’t like change. But we are working very hard with the frontline officers to make sure that we make adequate investments so they can do their jobs while also taking account of the fact that they are going through a lot of change, which we are determined to continue to implement but to do so in a way that is considerate of them,” he said.

After the board’s approval, the matter still needs to go to budget committee for further review. City council is expected to vote on the overall budget, which includes the allotment to the TPS, in March.