Toronto neighbours take to their street to dance away pandemic isolation

TORONTO -- A normally quiet Roncesvalles street gets a little less quiet every afternoon at 3 p.m. when residents along Fermanagh Avenue walk out their front doors, line up along the sidewalk—and dance.

It all started as a bit of a joke in the close knit community. Neighbours who usually meet at the corner coffee shop were trying to figure out how they could help those on their street who might be older or alone during the COVID-19 pandemic. That's when someone suggested to Donna McDougall that she should dance.

"Of course I laughed because how could you possibly do (a) line dance on a street with people going by and cars," McDougall told CTV News Toronto, "But then I thought about it and I thought I'll give it a try."

So, armed with a Bluetooth speaker and a playlist that varies from country to current hits, McDougall set up on the street and neighbours followed her lead. For one hour, every day (weather permitting), McDougall teaches neighbours of all ages how to line dance.

"I don't actually know peoples ages, because I don't necessarily know who is dancing. I can't see them because they have to face my back so they can follow me, but I can tell they're having a good time."

For McDougall, who had been teaching line dancing at the local YMCA before the pandemic hit, it's a new way to teach.

"I've had to modify every song to be one single line, but it's working" she said. "I assume they enjoy it. They keep coming."

What had been a twice-weekly activity for McDougall is now a daily event.

"At first I thought ‘Oh My God I've committed to this every day?’ And it's not just an hour for me, it's getting my playlists ready, it's learning the dances, modifying them—but it got me off the couch."

And getting active, and staying active is one of the things that neighbours say brings them out each day. Betty Kershner laughed as she told CTV News Toronto about the experience.

"It's been great and I think actually my fitness has improved under COVID-19 because of Donna."

Others say it's about fostering a sense of community.

"You know it doesn't really matter what you do at the moment to get to get people to have fun and come together," said neighbour Severin Wille. "But this neighbourhood, and especially Donna, is somebody who brings everybody together all of the time." 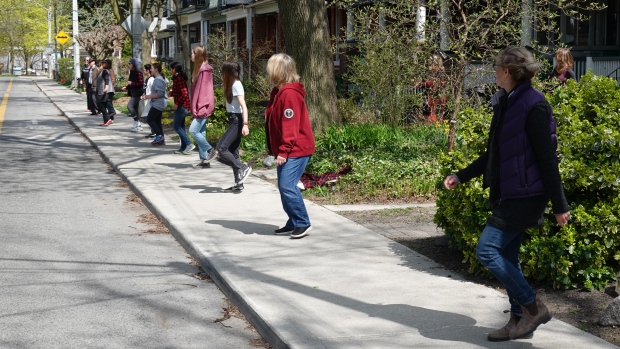 McDougall says she believes there are several reasons why the street dancing has become so popular.

"You're outdoors, you're exercising, and you're in communication with your neighbours, albeit at a distance."

Each dancer lines up at least six feet away from the next dancer along the side walk.

As for the teacher, McDougall says she's enjoying the exercise and having a focus for days spent in isolation.

"I have to say it got me off the couch, it got me away from the TV, I mean I've been binge watching a few shows,” she said. "I had no idea that this was going to be this much fun, and there are days that, I mean we are still in our houses a lot and there are days I wake up and I say thank goodness I've got line dancing. I've got something to do."

McDougall says she's thought about continuing her dance class post-pandemic, maybe once a week in a neighbourhood park. But for now she's focused on tomorrow's class.

"I thought I'd have a few neighbours might come out and say ‘okay I'm bored.’ In fact, now I'm feeling pressure to learn new songs because I'm here every day!"